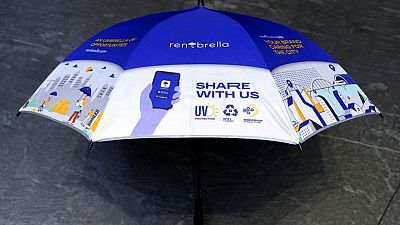 – A Brazilian umbrella-sharing app, which has for several months been giving New Yorkers a way to cope with unexpected downpours, is now preparing to expand to Europe.

Rentbrella launched in 2018 in Sao Paulo, a city known for torrential late afternoon summer rains. It offers an app that allows customers to borrow an umbrella from an automated kiosk and use it free of charge for 24 hours.

If they don’t return the umbrella within that period, they are charged $2 for the second day under the U.S. price plan and another $2 for the third day. When the daily charges hit $16, the user can keep the umbrella.

Freddy Marcos, one of the company’s three co-founders, said in an interview that Rentbrella aims to expand to at least 10 other countries in Europe in the next two years.

The company launched in the New York boroughs of Manhattan and Brooklyn in October with 35 kiosks, each with 100 umbrellas, under agreements with real estate firms such as WeWork, Tishman Speyer and Beacon Capital. Rentbrella plans to add 100 more stations throughout the United States this year.

“The best thing about it is that it is free,” said co-founder Ary Krivopisk, adding that Rentbrella aims to expand into London early this year.

The company plans to generate revenue from advertisements printed on the umbrellas, although it has yet to sign any such deals in New York.

The startup, which has so far raised $7 million from undisclosed investors, has around 40,000 umbrellas available in Sao Paulo.

An initial public offering is on its radar although not in the short term, Marcos said.

“We have a huge expansion to do in dozens of countries, but it’s something that’s on our radar in the future,” he said of a potential IPO.