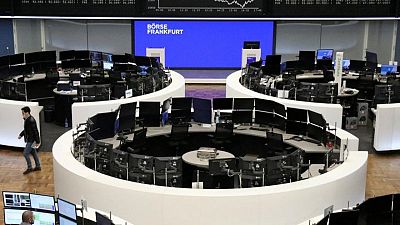 -Europe’s top equities benchmark plummeted nearly 4% on Monday, pulled down by worries about a Russian attack on Ukraine and the possibility of a more hawkish U.S. Federal Reserve this week.

The United States said on Sunday it was ordering diplomats’ family members to leave Ukraine, in one of the clearest signs yet that American officials are bracing for an aggressive Russian move in the region.

“It has been a brutal start to the week for stocks,” said Chris Beauchamp, chief market analyst at online trading platform IG.

“Investors would have spent the weekend reading of troop build-ups around Ukraine and the growing tensions between Russia and the West, providing yet another reason to either sell stocks or sit on the sidelines.”

Europe’s travel & leisure stocks and rate-sensitive technology shares were the hardest hit, each falling more than 5%. Tech stocks closed at their lowest level since June 2021.

The keenly awaited Fed meeting concludes on Wednesday. While policymakers may not raise interest rates until March, tougher language about inflation is already kicking in.

“For several years, the markets have become accustomed to buying the dips no matter what’s the fundamental backdrop. However, recent events appear to be seeing a significant loss of confidence in this mindset,” Michael Hewson, chief market analyst at CMC Markets, said.

Meanwhile, Vodafone climbed 4.5% after Reuters reported the company and Iliad were in talks to strike a deal in Italy that would combine their respective businesses.

British banknote printer De La Rue slumped 23.3% after it said its turnaround plan would be delayed by a year, while warning of annual profit falling short of market expectations.