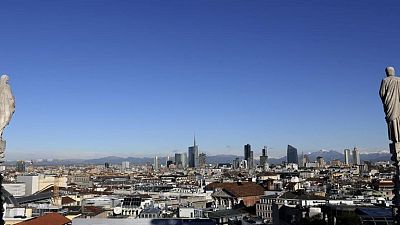 The scheme, funded by a series of compensatory measures, will not weigh on the public deficit which the Treasury is keen to reduce to 5.6% of growth this year from 9.4% in 2021.

The energy package, which is worth 1.7 billion euros ($1.93 billion), comes on top of more than 8 billion euros Rome has stumped up since last July to curb bills for households and business.

Soaring energy prices, triggered by heavy demand for gas as economies look to emerge from the health pandemic, have prompted governments across Europe to introduce measures to try to shield consumers.

The government said it plans to use around 1.2 billion euros of proceeds from carbon permit auctions to cut system-cost levies weighing on many firms. Such levies typically account for more than 20% of Italian retail energy bills.

Additional resources to mitigate bills will come from a clawback of profits from some operators benefiting from certain fixed-tariff solar power incentives that cost consumers some 6 billion euros per year.

But the government put on hold a securitisation scheme aimed at further cutting system-cost levies in energy bills due to its impact on state coffers, a minister told Reuters asking not to be named.

The energy transition ministry had estimated such a measure could generate at least 2.5 billion euros in savings.

The package approved on Friday also envisages grants and tax breaks to help hard-hit businessess such as discos, theme parks, wedding organisers and restaurants. The cabinet office did not detail the total amount of the subsidies.

According to a draft seen by Reuters, Rome also allocated 150 million euros to compensate those suffering side effects from COVID-19 vaccinations and 50 million to help pig farmers cope with a recent African swine fever outbreak.