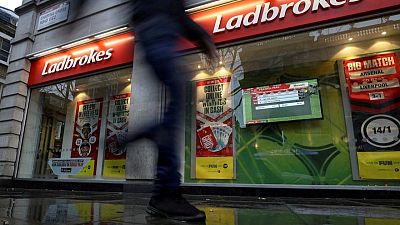 -British gambling firm Entain’s online betting revenue fell in the fourth quarter after nearly six years of double-digit growth, though activity at its shops bounced back as COVID restrictions were lifted, it said on Thursday.

Entain, which owns Ladbrokes and Coral betting shops and the bwin and partypoker online brands, also said it was tightening its outlook for annual core earnings to 875 to 885 million pounds ($1.2 billion) from 850 to 900 million pounds previously.

The company, which was the subject of two takeover approaches over the past year, said its online net gaming revenue fell 9% in the three months to Dec. 31 from a year earlier, when it reported particularly strong numbers.

It was the first decline after 23 consecutive quarters of double-digit revenue growth measured on a constant currency basis, though Entain said the fall was not as steep as feared.

The results were Entain’s first after a year in which both U.S. rival DraftKings and casino operator MGM made takeover approaches, though neither resulted in a deal.

The takeover interest came during a year of rapid growth for the online betting business during coronavirus lockdowns and as BetMGM – Entain’s U.S. online sportsbook joint venture with MGM – continued to gain market share.

BetMGM raised its 2022 revenue forecast on Wednesday and said it expected to report a core profit in 2023.

Shares in Entain climbed 48% last year but have fallen 20% since DraftKings dropped its pursuit of the company in October. The stock was up 0.5% at 0950 GMT on Thursday following the release of the revenue figures.

“We believe that (Entain’s) share price fails to reflect BetMGM’s increasingly strong position in the U.S. and Entain’s strong foundations for funding the expansion,” analysts at Peel Hunt said in a note.($1 = 0.7338 pounds)