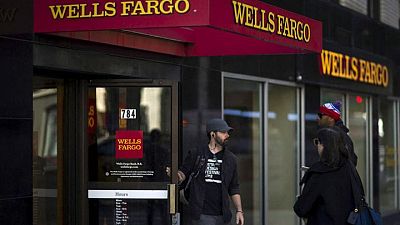 -Wells Fargo & Co on Friday beat analysts’ estimates for fourth-quarter profit as a rebound in U.S. economic growth encouraged more customers to take loans and the bank kept a tight lid on costs.

Profit jumped 86% to $5.8 billion, or $1.38 per share, flattered by a $943 million gain from the sale of some businesses and an $875 million reserve release from pandemic-related losses that did not materialize.

Average loans were down 3% from the fourth quarter last year, although the bank noted that loans ticked up in the last six weeks of 2021. “Period-end” loans rose 1% from the same time last year, and were up 4% from the third quarter.

“The strong economy continues to positively impact our customers and our results,” Chief Executive Officer Charlie Scharf said on a call with analysts.

The bank’s shares were up 3.2% in afternoon trade on Friday and have gained 20% since the start of the year.

The other lever Wells pulled to boost its top line was expenses. Scharf has made cost cuts a cornerstone of his turnaround plan, targeting $10 billion in savings annually over the long term.

The bank cut non-interest expenses by 11% to $13.2 billion by reducing personnel costs, the number of bank branches and its office space.

Headcount across the company fell by more than 7% over last year to 249,000 employees from 269,000, as the bank let go of 20% of managers who had only a few direct reports and 40% of non-engineering technology workers.

Wells Fargo closed 270 branches and reduced branch staffing in some locations because overall teller transactions are down 30% from pre-pandemic levels, executives said.

With fewer workers in offices, the bank offloaded 7% of its office space real estate portfolio in 2021 and plans to cut it by another 5% this year.

And Scharf said they are nowhere near done.

“If you go back over a decade, one of the strengths of this company was never efficiency,” Scharf said. “As we get the efficiencies we’re starting to see, it is like peeling the onion back. The next set of opportunities become even clearer.”

The fourth-largest U.S. bank has been in regulators’ penalty box since 2016 when a sales-practices scandal came to light, and it has paid billions in fines and restitution.

Wells Fargo is also operating under a $1.95-trillion asset cap imposed by the Federal Reserve in 2018, which has crimped its ability to boost interest income by improving loan and deposit growth.

“We still have a multi-year effort to satisfy our regulatory requirements – with setbacks likely to continue along the way – and we continue our work to put exposures related to our historical practices behind us,” Scharf said.

Still, Chief Financial Officer Mike Santomassimo said Wells could see as much as an 8% increase in net interest income this year over 2021 if projections on loan growth and the Federal Reserve’s interest rate hikes hold.

Meanwhile on Friday, JPMorgan Chase & Co and Citigroup Inc both beat analyst profit estimates. While profits at JPMorgan, the country’s largest lender, were hurt by a slowdown in its trading arm, a stellar performance at its investment banking softened the impact.

Investors have been focused on banks benefiting from the U.S. Federal Reserve indicating it might raise interest rates sooner than expected due to unabated inflation.

“If (Wells) can maintain the momentum they have right now on expense cuts … they have some tailwinds coming into this year from higher rates and the improving economy, which should benefit loan growth and boost net interest income,” said John Mackerey, an analyst with DBRS Morningstar.