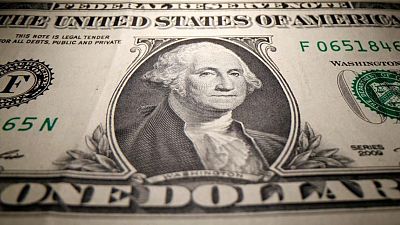 NEWYORK -The U.S. dollar snapped a three-day losing streak on Friday as the recent selling spree driven by the view that Federal Reserve tightening moves were largely priced in abated, and as weaker risk appetite in financial markets led investors to shun riskier currencies.

The U.S. dollar index was 0.3% higher at 95.157, but still looked set to finish the week down about 0.6%, its worst weekly showing since early September.

The greenback, which rose more than 6% against a basket of currencies in 2021, came under pressure this week despite Fed Chair Jerome Powell saying that the U.S. economy is ready for the start of tighter monetary policy and data showing the largest annual rise in inflation in nearly four decades.

“Investors appear to be taking the view that the USD has peaked and that Fed tightening moves are priced in and the likes of the euro offer better potential returns down the road,” Scotiabank foreign exchange strategists said in a note.

“We do not concur but have to acknowledge that the USD has suffered a setback — psychologically, at least — by breaking with supportive yield spreads versus its peers and by breaking below the base of its recent consolidation range,” they said.

Hedge fund dollar positioning close to the highest levels since early 2020 has added to the selling pressure on the dollar this week, analysts said.

U.S. retail sales dropped by the most in 10 months in December, likely the result of Americans starting their holiday shopping in October to avoid empty shelves at stores. [nL1N2TU18H]

On Friday, the dollar struggled to advance against the Japanese yen, with the U.S. currency falling 0.02% to more than a three-week low of 114.15 yen.

The safe-haven Japanese currency has benefited from the recent souring of risk sentiment in global financial markets.

Bank of Japan policymakers are debating how soon they can start telegraphing an eventual interest rate hike, which could come even before inflation hits the bank’s 2% target, Reuters reported on Friday.

With global stock markets under pressure on Friday and Treasury yields higher, the Australian dollar, seen as a liquid proxy for risk appetite, fell 0.99% to a two-day low.

Sterling was 0.22% lower against the dollar as investors assessed the impact of a potential leadership change in the country as Prime Minister Boris Johnson faces the gravest crisis of his premiership after revelations about a series of gatherings in Downing Street during COVID-19 lockdowns.

Cryptocurrencies struggled to make a meaningful rebound after sharp losses at the start of the week. Bitcoin was up about 1% on the day at $43,086.34, not far from the five-month low of $39,558.70 touched on Monday.