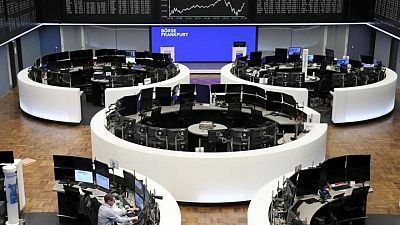 The pan-European STOXX 600 shed 1.0%, while also marking its worst week since late November.

European Central Bank President Christine Lagarde said the bank is ready to take any measures necessary to bring inflation down to its 2% target, driving up bets on a rate hike this year.

Tightening monetary conditions will bring an end to pandemic-era liquidity measures, which had flushed the market with cash and driven stocks to record highs through 2021.

Power group EDF plunged 14.6%, and was the worst performer on the STOXX 600 after France ordered the state-controlled firm to sell more of its cheap nuclear power to smaller competitors to limit electricity price rises in the country.

Nearly all sectors and regional stock indexes were in the red on Friday. Retailers were the worst performers for the day, while oil stocks were the sole gainers.

“European stocks have taken the cue from falls in Asia and the U.S. amid expectations there will be a much more aggressive stance taken to combat soaring inflation,” Hargreaves Lansdown analyst Susannah Streeter said.

Industrial goods were the worst performing European sector this week, down 3.8% as investors fretted over supply chain problems hitting production.

Strength in oil prices saw oil and gas stocks outpace their peers this week with a 4.6% jump.

Geopolitical tensions also dulled sentiment in Europe, as no breakthrough was reached at meetings between Russia and Western states, at a time when Moscow has massed more than 100,000 troops at its frontier with Ukraine.

“There’s increased nervousness around an escalation in tensions … as traders wait for the next move from diplomats,” Streeter said.

Among other stocks, German business software giant SAP closed flat, even after it said fourth-quarter revenue from its cloud computing business jumped 28%.

Europe’s third-largest insurer Assicurazioni Generali dropped 1.5% after announcing director Francesco Caltagirone has resigned from the board amid a boardroom spat between top investors.

Silicon specialist Wacker Chemie jumped 7.3% after saying 2021 earnings were above its own target range and beat analyst expectations.