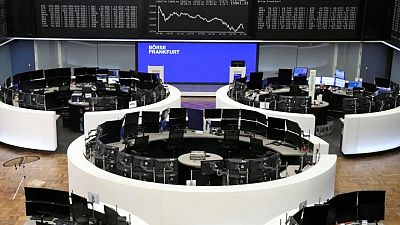 – Investors venturing back into tech shares along with upbeat expectations for the fourth-quarter earnings season led European stocks to recover on Tuesday, after fears of rising rates drove heavy losses in recent sessions.

The pan-European STOXX 600 closed 0.8% higher, recovering from its worst day in 1-1/2 months. Technology stocks were the best performers for the day, adding 1.9% after tumbling nearly 8% over the past seven sessions.

Rising bond yields across the world on expectations of U.S. and European interest rate hikes this year had spurred large losses in tech as investors discounted future earnings from the sector.

“The market is grappling with a broad-based rotation and the potential for a hastened pace of rate hikes, which is leading to volatility,” said Greg Marcus, managing director, UBS Private Wealth Management.

However, the European Central Bank (ECB) does not see euro zone inflation above its 2% target in the medium term, chief economist Philip Lane said in an interview, even as inflation across the bloc rose to 5% in December.

The upcoming fourth-quarter earnings season is expected to strike a positive note for stock markets. Germany’s Delivery Hero SE jumped 5.0% after saying it expects its food delivery business to break even during the second half of 2022 on demand that has soared since the pandemic began.

“Regardless of the volatility seen in markets so far this year, corporate fundamentals are strong and we are expecting double-digit earnings growth this year, which should bode well for stock prices in 2022,” UBS‘ Marcus said.

Profit for companies listed on the STOXX 600 is expected to jump 49.3% in the fourth quarter to 109.1 billion euros ($123.7 billion) from a year earlier, Refinitiv data showed.

Among other stocks, Italy’s second-largest bank, UniCredit, fell 1.1% after reports that it was interested in bidding for Russia’s Otkritie Bank.

HelloFresh gained 1.0% after the German meal-kit delivery firm announced a share buyback of up to 250 million euros.

Construction chemicals maker Sika AG climbed 2.9% after reporting a 17.3% rise in 2021 sales, boosted by acquisitions and an upturn in the building industry.

Meanwhile, Deutsche Bank slipped 0.5% after U.S. financial investor Cerberus, which has favoured a merger of the bank and Commerzbank, divested a large chunk of its holdings in the top two German lenders.