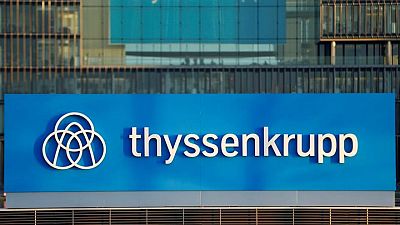 FRANKFURT – Thyssenkrupp’s hydrogen unit Uhde Chlorine Engineers (tkUCE), which the German conglomerate plans to list in spring, has signed a deal to deliver a 200-megawatt electrolyser to oil major Shell, it said on Monday.

Shell is expected to make its final investment decision for the site this year. Production could then start in 2024, said Thyssenkrupp, which has scheduled a capital markets day for tkUCE later this week.

“With our large-scale standard module size, we will further strengthen Shell’s hydrogen strategy,” Christoph Noeres, head of Green Hydrogen at tkUCE, said in a statement.

“Our partnership perfectly combines our engineering excellence with Shell’s competence of a large global energy player.”

Shares in Thyssenkrupp, which holds 64% in tkUCE, were up 2.6% after the announcement, reflecting the hopes tied to hydrogen as a booming business area across Europe.

Investors will get a deeper look at the business, in which Italy’s De Nora is a co-shareholder, for the first time at a capital markets day on Jan. 13.