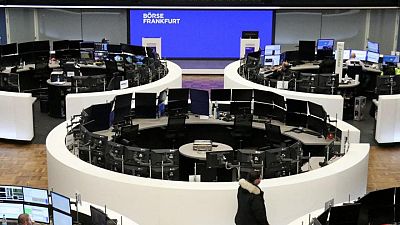 The pan-European STOXX 600 closed 1.5% lower, with technology stocks tumbling 3.6% to a near three-month low. Losses were spread out across most European sectors.

Rising bond yields in Europe and the United States were the main driver behind the stock rout, as investors awaited an end to pandemic-era liquidity measures in the wake of surging inflation.

“Inflation is concentrating minds of investors in Europe… which is piling the pressure on the ECB (European Central Bank) to tighten monetary policy,” said Susannah Streeter, senior investment and markets analyst at Hargreaves Lansdown.

December inflation rose to a record high of 5% for the currency bloc, data showed last week.

On Monday U.S. 10-year yields hit a two-year high, while Germany’s 10-year yields briefly hit their highest since May 2019. Investors have begun pricing in rate hikes by the ECB later this year. [US/] [GVD/EUR]

Regional bank stocks, which tend to benefit from higher lending rates, were the sole gainers, rising 0.2%.

Credit Suisse rose 1.3% after traders cited media speculation about a possible sale or merger of the embattled Swiss bank.

The STOXX 600 kicked off January with a rally to record highs but has hit choppy ground recently as worries around inflation, COVID-19 and the central bank tightening cycle cloud the equities outlook for 2022.

But a survey showed on Monday that investor morale in the euro zone had risen this month as momentum is not expected to slow despite the new variant. The effect of rising COVID-19 cases is expected to be felt in January.

BMW gained 1.7% after Goldman Sachs upgraded the German car giant to “buy” from “hold”, saying the consolidation of the BMW Brilliance Automotive joint venture should result in earnings growth this year and next.

French diagnostics company Eurofins Scientific dipped 4.7% after Jefferies downgraded the firm to “hold” from “buy”, saying COVID-19 testing has lifted the stock towards its target price.

French technology consulting company Atos slumped 16.8% to the bottom of the STOXX 600 after issuing a profit warning that reflected customer deal delays and pressured margins at its hardware and software resales unit.