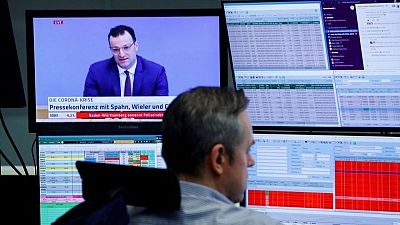 -European shares slipped on Friday on concerns over rising inflation and surging coronavirus infections, while investors were uncertain over how weak U.S. payrolls data would influence the Federal Reserve’s plans for tightening policy.

The European travel and leisure sector sank 1.6% and was among the worst performers for the day as countries grapple with an Omicron-led rise in COVID-19 cases.

The STOXX 600 has fallen 1.6% since Wednesday as expectations of higher interest rates battered heavyweight technology stocks. The sector was the worst performer this week, losing around 4.5%.

Hawkish signals from the Fed have also dented equity markets. But while weak U.S. payrolls data on Friday somewhat undermined the Fed’s tilt, analysts said rising wages could feed into inflation and push the central bank into tightening policy.

“Inflation is the main concern for the Fed, and they are going to go ahead with rate hikes and potentially balance sheet run-off in order to remove monetary accommodation,” said Chris Zaccarelli, chief investment officer for Independent Advisor Alliance.

“The report today is unlikely to do anything to change the Fed’s mind.”

The prospect of higher interest rates boosted European bank stocks, making them the best performers this week with a 6.7% jump.

Gains in some chipmakers helped limit some losses in the technology sector. Italy’s STMicroelectronics, rose more than 3% after posting quarterly revenue above its own estimates.

Deutsche Bank climbed 1.8% to a more than six-month high. The German lender’s finance chief told Handelsblatt in an interview that the firm is confident it will reach a key profitability target this year.

Dutch insurer Aegon rose more than 4% to the top of the STOXX 600, after it announced a 50 million euro share buyback.

Meanwhile, Airbus dropped 0.8% after reports that Qatar Airways is seeking more than $600 million in compensation from the planemaker over surface flaws on A350 jetliners. Airbus has said that while it acknowledges technical problems, there is no safety issue.

Polish parcel locker firm InPost plummeted 14.0% to the bottom of the STOXX 600 after posting weaker-than-expected quarterly parcel volume growth in the country.