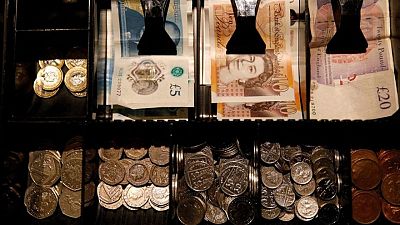 LONDON -The pound slipped versus the dollar and euro on Thursday, hurt by dollar gains after the Fed meeting minutes, while investors weighed up the extent to which easing fears around the Omicron variant of COVID-19 would translate into economic gains.

Risk-sensitive currencies such as the British pound, Australian dollar and Canadian dollar were down on the day versus the U.S. dollar, which was boosted late on Wednesday and overnight by the minutes of the Fed’s December meeting being more hawkish than expected.

These sparked worries about faster than expected monetary policy tightening as they showed that a “very tight” job market and unabated inflation might require the Fed to raise rates sooner than expected.

Services PMI data came in slightly higher than the preliminary “flash” reading, but still showed that Britain’s services sector suffered its biggest loss of momentum last month since the country was last in lockdown, with the index falling to a ten-month low as the spread of the Omicron variant of coronavirus hammered hospitality and travel.

Still, the pound had a strong start to the year, having strengthened against the dollar on Tuesday and Wednesday and risen from the one-year low of $1.31615 seen in December.

Investors expect the Bank of England to raise interest rates as early as next month after a surprise hike in December.

Analysts say the strengthening is also due to investors seeing the Omicron variant of COVID-19 as less disruptive to the economy than originally feared.

Although Britain has seen record prevalence of the virus, with one in 15 people in England infected, Prime Minister Boris Johnson has resisted imposing stricter lockdown measures in England.

On Wednesday Johnson announced a relaxation of the rules around travelling to England, scrapping the need for a pre-departure test.

Jeremy Stretch, head of G10 FX strategy at CIBC, said that the PMI data being revised upwards from the December estimate was a sign of improvement and that euro-sterling could head below the 83 level.

“The modest uptick that we did see from the flash estimate I think is relevant because I think that does suggest that the service sector is also trying to ride out the Omicron variant in the same way the politicians are trying to do.”

But Geoff Yu, FX and macro strategist at BNY Mellon, wrote in a client note that most of the gains for sterling versus the euro are already priced in.

“Barring a highly unlikely growth surge driven by productivity or real income gains, all the risks to the UK are now to the downside, and the country is still struggling to make the most of its relative lack of restrictions,” he wrote.