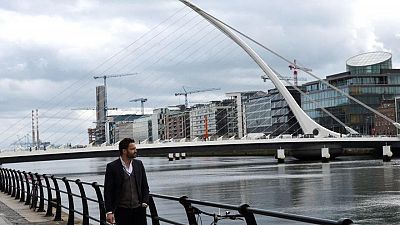 DUBLIN -Ireland ran a lower-than-expected 2021 budget deficit of around 4% of the economy due to a surge in tax receipts, including another record contribution from the corporate sector, the finance ministry estimated on Wednesday.

The ministry had forecast in October that it would finish the year with a deficit of 5.9% of modified gross national income – the most accurate measure of the size of Ireland’s economy – down from 8.8% last year.

However, the 68.4 billion euros of tax collected last year was the largest yield ever recorded, beating by more than 9 billion euros the previous peak set in 2019, before the COVID-19 pandemic struck.

Spending was also 1.5% below forecast after government departments did not use the record amounts allocated to them.

Corporate receipts are mostly generated from the large hub of multinational companies attracted to Ireland by its low corporate tax rate. The total corporate returns for 2021 almost passed out all the annual VAT take for the first time.

Income tax and VAT – the two largest tax categories – finished last year 4.8% and 7.5% above forecast as the economy weathered one of Europe’s longest COVID-19 shutdowns in the first half of 2021 and wages grew strongly in high earning sectors such as technology.

McCarthy added that Ireland will likely run a deficit lower than the 3.4% of economic activity forecast for 2022 if the current COVID-19 wave recedes relatively quickly. A deficit of just 0.4% is currently pencilled in for 2023.

He also expects corporate tax receipts to increase again this year before international reforms made to the way large multinationals are taxed kick in next year.

Finance Minister Paschal Donohoe said it was highly likely that at some stage corporate receipts would decline.