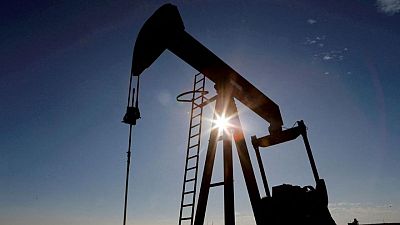 The market pared gains late in the day after the release of minutes from the latest U.S. Federal Reserve meeting that showed policymakers may have to raise rates more quickly than markets anticipated. Oil dropped, following other risk assets like stocks.

U.S. crude stocks dropped by 2.1 million barrels, owing in part to tax incentives for producers to reduce inventories before year-end.

However, gasoline inventories jumped by more than 10 million barrels, and stocks of distillates rose by 4.4 million barrels. Analysts cited soft demand during the last week of 2021 as people hunkered down due to the Omicron variant of the coronavirus. [EIA/S]

The United States reported nearly 1 million new coronavirus infections on Monday, the highest daily tally of any country in the world and nearly double the previous U.S. peak set a week earlier. Overall product supplied, a proxy for demand, fell sharply, though the last four weeks has seen stronger demand than the same period two years ago before the pandemic’s onset.

“Implied product demand – particularly for gasoline – slumped, suggesting that the public were cautious about travel in the wake of surging cases of the Omicron variant. These fears are likely to persist for a few weeks yet,” wrote Caroline Bain, chief commodities economist at Capital Economics.

OPEC+ producers, which include members of the Organization of the Petroleum Exporting Countries along with Russia and others, on Tuesday agreed to add another 400,000 barrels per day of supply in February, as they have done each month since August.

Still OPEC+ will probably struggle to reach that target, as members including Nigeria, Angola and Libya face difficulties ramping up production, Barclays analysts said in a note. Even as the group boosts targets, “actual incremental supplies are likely to be much smaller, similar to the demand effect from Omicron,” the bank wrote.