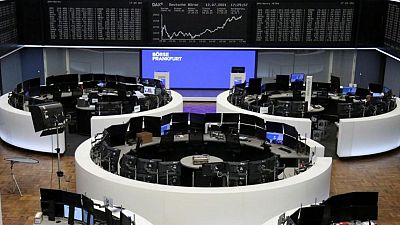 The continent-wide STOXX 600 index added 0.2%, hovering just below a record high hit in the previous session.

European tech shares rose 0.2% after getting slammed the previous day, while sectors considered “bond proxies” such as utilities and food & beverages fell.

“There are wobbles in the global equity markets on the back of higher back-end U.S. Treasury yields and concerns about the Chinese tech sector,” said Sebastien Galy, senior macro strategist at Nordea Asset Management.

“Of those concerns, we should see the fear ebb to leave us with the shape of a reality that is less clear cut than post COVID-19 shock.”

The euro zone’s economic recovery faltered in December as a resurgence in COVID-19 infections curtailed growth in the bloc’s dominant service industry, a survey showed.

The IHS Markit’s Composite Purchasing Managers’ Index (PMI), a good gauge of overall economic health, sank to a nine-month low of 53.3 in December from 55.4 in November.

The STOXX 600 hit fresh record highs at the start of the year, extending a rally from 2021, but growing expectations that the U.S. Federal Reserve could hike rates as early as March and worries over the fast-spreading Omicron variant have clouded the outlook for equities.

With fourth-quarter earnings season around the corner, Refinitiv data showed that profit for companies listed on the STOXX 600 was expected to jump 49.3% to 109.1 billion euros ($123.3 billion) from a year earlier.

Among the biggest movers on Wednesday, Renault jumped 3.2% to the top of France’s CAC 40 index after Qualcomm announced deals to supply chips to automakers including the French carmaker.

German carmaker BMW gained 0.3% as it achieved record sales of over 2.2 million vehicles from its BMW brand in 2021.

However, Nestle slipped 2.4% after Jefferies downgraded the Nescafe maker on expectations that the Swiss company’s margins would remain under pressure from commodity cost inflation.

Vaccine developer Valneva shed 2.4%, falling for the seventh day, amid uncertainty over developments in the company’s COVID-19 vaccine candidate.