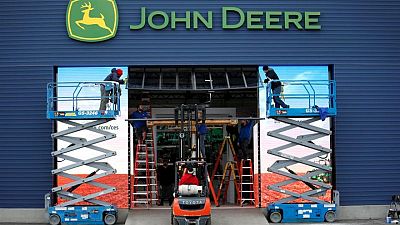 DETROIT – John Deere & Co said on Tuesday it will start commercial delivery this year of technology that enables a tractor to till a field without an operator in the cab, a first for the top North American tractor manufacturer after years of effort to automate farm work.

Deere plans a low-volume launch this year delivering systems for 12 to 20 machines, and then scaling up, Jahmy Hindman, Deere’s chief technology officer, told Reuters. The company is weighing whether to sell the technology, lease it, or offer it to farmers in a subscription package that could allow for upgrades as hardware and software evolve, he said.

The cameras and computers for automated tilling can be installed on an existing tractor and tiller machine in a day, Hindman said.

Deere and other equipment makers such as Caterpillar have invested heavily in technology to automate off-highway vehicles such as farm tractors and mining machines. In the farm sector, finding workers to operate tractors is a chronic problem made more acute by the pandemic.

For the farm equipment industry, Deere’s commercial launch is a significant step in a journey that has been underway for nearly two decades, beginning with the use of satellite positioning and later hands-free operation with a driver still in the cab. Deere has been testing fully autonomous tractors for three to four years, Hindman said.

While automated tractors do not have to contend with pedestrians, the chaos of urban traffic or highway safety regulations, Hindman said self-driving tractors do need to be able to navigate accurately, avoid obstacles and precisely control equipment such as a tiller.

Deere’s initial automated tractors will use stereo cameras in the front and rear, and can send images of what the cameras see via a smartphone app to a farmer or equipment operator. The operator can take the tractor to a field, swipe the smartphone screen and the machine will start on a programmed path.

The tractor’s computerized vision system will monitor the tiller, which will have mirrors installed on the shanks that churn plant stubble into the ground. If one of the shanks hits a rock and gets tipped up, the change in the reflection from the mirror will be visible to a remote operator.

Deere is working on automating other farm operations, with spraying likely the next target for automation, Hindman said.