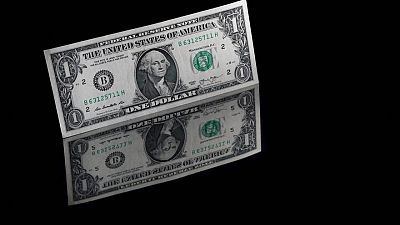 NEWYORK – The U.S. dollar rose for a fifth straight day against the Japanese yen on Tuesday, hitting a five-year high as investors viewed the Omicron variant as not likely to derail the global economy or delay the Federal Reserve’s expected rate hikes.

A rise in U.S. Treasury yields on expectations for a Fed rate hike this year have supported the greenback, with those foreseeing at least a 25-basis-point hike at the March meeting of the central bank’s policy-setting committee topping 60%, the CME FedWatch Tool found.

“Absolutely, dollar/yen on a tear, it is all yield-driven, 2022 is here and the market is just bracing for higher rates from the Fed, so that has been the key catalyst pushing dollar/yen higher,” said Joe Manimbo, senior market analyst at Western Union Business Solutions in Washington.

“The main thing here, certainly Omicron is very unpredictable, but the market’s take so far is that it doesn’t look like it is going to deal a significant blow to the recovery, so that just increases the spotlight on central banks and how they are likely to push interest rates higher.”

Minneapolis Federal Reserve Bank President Neel Kashkari, known as a dove, said he expects the U.S. central bank to need to raise interest rates two times this year to address persistently high inflation, reversing his long-held view that rates will need to stay at zero until at least 2024.

On Monday, the U.S. Food and Drug Administration authorized the use of a third dose of the Pfizer and BioNTech COVID-19 vaccine for children ages 12 to 15, and narrowed the interval for booster shot eligibility to five months from six.

Investors have come to view Omicron as potentially less disruptive to the global economy than previous variants of the coronavirus, as studies have indicated the risk of hospitalization is lower.

Sterling was last trading at $1.3531, up 0.45% on the day, after hitting a two-month high of $1.3557 against the greenback and a near two-year high against the euro, buoyed by expectations the Bank of England will raise interest rates next month.

The dollar index briefly pared gains after economic data from the Institute for Supply Management (ISM) said its index of national factory activity fell to a reading of 58.7 last month, below the 60.0 estimate. That was the lowest since last January and followed a 61.1 reading in November.

Other data showed a record 4.5 million Americans voluntarily quit their jobs in November, which will likely pressure businesses to increase wages in order to attract workers.