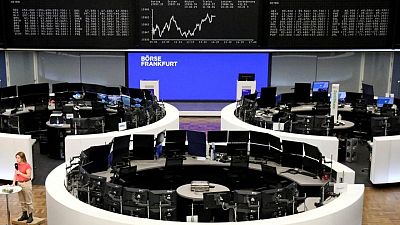 -European stocks extended their new year rally on Tuesday, led by economically sensitive banks and travel stocks on signs that the Omicron coronavirus variant might be less severe than initially feared.

The European banks subindex jumped 3.3% to November highs, and was the best performer for the day as government bond yields on both sides of the Atlantic got a boost from expectations of tighter monetary policy. [US/] [GVD/EUR]

Europe’s travel and leisure index jumped 3.5% to its highest in more than six weeks. British airlines soared, with Ryanair and British Airways-owner IAG climbing 8.9% and 11.3%, respectively.

Wizz Air jumped 12.2%, leading gains in the STOXX 600 after reporting a spike in December traffic.

London’s FTSE 100 gained 1.6%, catching up with a global rally as trade resumed after a long holiday weekend.

“There are tentative signs that this variant may not be as bad as feared,” Max Kettner, chief multi-asset strategist at HSBC, said in a note.

“UK hospitalisations have increased in the past couple of days, but the link clearly appears to be weaker than during the previous winter wave. As such, the sensitivity of cases to hospitalisations has barely budged so far. If that trend was to continue, that’s good news.”

Britain’s vaccine minister said people being hospitalised with COVID-19 in the United Kingdom were broadly showing less severe symptoms than before.

French Finance Minister Bruno Le Maire said although the surge of the Omicron variant was disrupting some sectors, there was no risk of it “paralysing” the economy, and stuck to a forecast of 4% growth for 2022 GDP.

Stock markets in Europe and the United States hit a series of record highs in 2021 as vaccine rollouts and huge stimulus packages to boost the pandemic-hit global economy offset worries about persistently high inflation and new COVID-19 variants.