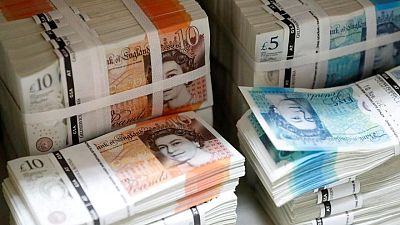 LONDON -The pound approached two-year highs against the euro on Tuesday and hit a two-month high versus the dollar, supported by a continued rise in gilt yields on growing expectation the Bank of England will raise interest rates next month.

Meanwhile, money markets are pricing in two 15 basis-point rate increases by the BoE by its March meeting and almost a full percentage point by year-end following a surprise rate rise last month.

In comparison, a 25 bps U.S. rate rise is priced by May, and two more by end-2022 while in the euro zone no rate increases are expected this year, with economic activity still weak and a number of countries under COVID-linked curbs.

“The prospect of European rate hikes is very low and prospect of hikes in the UK are pretty good,” said Mizuho senior economist Colin Asher, who expects the BoE to raise rates twice this year and continue doing so in 2023.

Jobs growth slowed but new orders and output rose at a faster pace than in November, while prices charged by factories rose at their fastest pace on record, keeping alive inflation concerns.

British “real” or inflation-linked yields also have risen, up around 100 bps on the 10-year segment in the past month while German and U.S. equivalents have risen 20 bps or less.