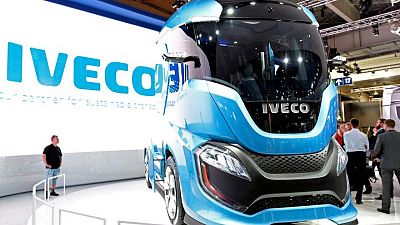 MILAN -Iveco offers investors a bet on a small but dynamic company with proven turnaround skills, its CEO Gerrit Marx said on Monday as shares in the Italian truckmaker fell on its market debut.

Meanwhile shares in CNH, which is now focused on agriculture and construction vehicles, rose 1.1% to 15.19 euros a share.

Analysts blamed partly technical reasons and the holiday season, with the London market shut, for Iveco’s drop, saying it would take longer to assess the reaction to the spin-off which leaves it more exposed to tough competition.

Speaking before the listing, Marx said Iveco was gaining market share in light trucks and buses and improving its heavy duty truck business, which was “already in a very good shape”.

“We are small but we can act very fast. We have proven that in only two years we can develop full electric trucks and bring them to series production,” Marx told reporters.

“We’re a little bit crazy when it comes to deploying new technologies, we have to be, because if I work like our large competitors work, there is no Iveco tomorrow.”

The group, whose top investor is Exor, the holding company of Italy’s Agnelli family, in November presented a business plan focused on zero-emission trucks and buses and a promise to act like a startup.

Asked about Iveco’s partnership strategy at a ceremony for its market debut, Marx said that discussions would now resume after a quiet period before the listing, but there was “nothing immediate” on the horizon.

Iveco, which has a joint venture with U.S. group Nikola to produce battery electric and hydrogen heavy trucks, is looking for partnerships in technology, including fintech, components supply and development projects.

“On heavy duty trucks a partner can help too, not necessarily in Europe,” the German executive added.

The smallest among major European truckmakers, Iveco has often been seen as a potential M&A target. Marx said he saw Iveco neither as a target nor an aggressive dealmaker.

Intesa Sanpaolo analyst Monica Bosio said that Iveco was well set to operate independently but “in the medium-long term its commitment in partnering with other players may lead to the finalisation of M&A deals”.

Exor, which now holds 27% of Iveco common shares and 42.5% of voting rights, has reaffirmed its commitment “to the long-term development” of both Iveco and CNH.