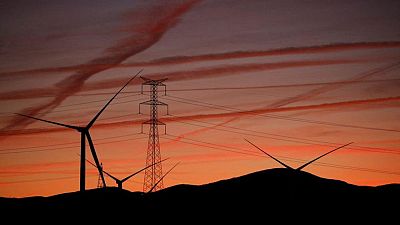 While generally strong wind and comparably weak demand will likely cap prices this week, the German week ahead position increased strongly to reflect schools holidays ending and industry revving up again after the seasonal break.

French grid operator RTE said last week that the outlook for capacity was uncertain after the second half of January.

Over-the-counter baseload for Tuesday in Germany stood at 154 euros ($174.82) per megawatt hour (MWh) at 1055 GMT, 54% above the price paid last Thursday for Monday delivery.

German wind power should fall to 19.6 gigawatts (GW) day-on-day from 38.3 GW and resume levels of between 15 and 34 GW later in the week, Refinitiv Eikon data showed.

Available nuclear capacity in France rose to 74.7% of installed capacity, a 2.9 point rise over Friday’s level.[POWER/FR]

Along the curve, German front-year power and the equivalent French contract were untraded after respective settlements at 111 euros and 124.5 euros on Dec. 31.

Germany at the weekend welcomed the latest EU energy taxonomy plan on labelling some gas projects as “green”, but still opposes the also validated nuclear energy, which France relies on.