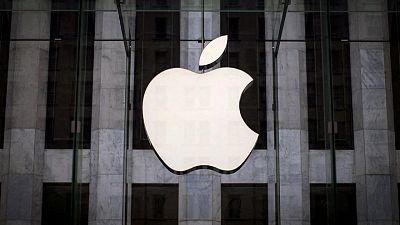 – Apple on Monday became the first publicly traded company with a stock market value of over $3 trillion, marking the latest milestone in the Silicon Valley heavyweight’s spectacular stock surge since introducing the iPhone in 2007.

Apple’s shares have climbed around 5,800% since co-founder and former Chief Executive Steve Jobs unveiled the first iPhone in January 2007, far outpacing the S&P 500’s gain of about 230% during the same period. (Graphic: Apple vs the S&P 500 since the iPhone’s introduction, https://fingfx.thomsonreuters.com/gfx/mkt/zdpxoqdrkvx/Pasted%20image%201641232975265.png)

Microsoft and Amazon have each briefly eclipsed Apple as the most valuable publicly listed U.S. company in the past three years, although Apple has recently pulled ahead. Microsoft’s stock market value currently stands at about $2.5 trillion, while Amazon’s is at around $1.7 trillion, having fallen behind Alphabet, now at $1.9 trillion. (Graphic: Apple vs other Big Tech, https://fingfx.thomsonreuters.com/gfx/mkt/gkplgljzdvb/Pasted%20image%201639173927883.png)

Several Big Tech firms saw their shares outperform Apple’s 2021 gain of 34%. Microsoft and Tesla both rallied about 50% in 2021, while Alphabet jumped 65% and Nvidia soared 125%, putting the chipmaker’s stock market value at over $700 billion.

Following its 2.9% gain on Monday afternoon, Apple is trading at about 30 times its expected 12-month earnings, down from a multiple of 32 in early 2021 but still at highs not seen since 2008, according to Refinitiv data. (Graphic: Apple’s PE valuation, https://fingfx.thomsonreuters.com/gfx/mkt/znvnexjojpl/Pasted%20image%201639174241611.png)

As Apple’s stock has climbed in the past several months, so have analysts’ price targets. J.P.Morgan and BofA Global Research in December each raised their price targets for Apple’s stock to a street high of $210, according to Refinitiv. That price target would put Apple’s market capitalization at about $3.45 trillion. (Graphic: Apple vs analyst price targets, https://fingfx.thomsonreuters.com/gfx/mkt/dwvkrzjndpm/Pasted%20image%201639173730845.png)