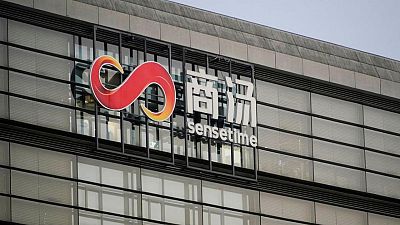 By Scott Murdoch and Kane Wu

– SenseTime Group shares surged as much as 23% from their IPO price on Thursday, adding billions of dollars to the artificial intelligence start-up’s market value as it debuted in Hong Kong in the city’s final major float for the year.

Some analysts had expected the shares to struggle due to weak demand during the IPO process and worries about SenseTime’s inclusion on a U.S. investment blacklist that prompted the Chinese firm to shelve its first attempt to list.

“The main reason that support is coming to the share price is that the market had already digested the U.S. sanction issue,” said Kenny Ng, Everbright Sun Hung Kai analyst.

“SenseTime set the IPO price at the lower end of the range which left room for the price performance after listing.”

The deal valued SenseTime at $16.4 billion, while at the session’s high its market capitalisation had added some $3.8 billion.

SenseTime ended at HK$4.13 in its debut session, up 7.3% from its IPO price. It was the fifth most actively traded stock by turnover with 329.97 million shares changing hands worth HK$1.406 bln.

The broader Hang Seng Index gained just 0.11% while tech stocks in Hong Kong were marginally positive on the day.

Hong Kong has struggled to attract big ticket deals this year due to a regulatory crackdown on a number of sectors by Chinese authorities.

It shelved its first attempt on Dec. 13 after it was placed on the U.S. blacklist just as the institutional book build for the deal was being concluded.

The U.S. Treasury added SenseTime to a list of “Chinese military-industrial complex companies” on Dec. 10, accusing it of having developed a facial recognition programme to determine ethnicity, with a focus on identifying ethnic Uyghurs.

U.N. experts and rights groups estimate more than a million people, mainly Uyghurs and members of other Muslim minorities, have been detained in recent years in a vast system of camps in China’s far-west region of Xinjiang.

While SenseTime has said its inclusion on the blacklist did not impose any restrictions on its business operations, the ban meant U.S. investors could not participate in the IPO.

SenseTime relaunched the deal on Dec. 20, but with a higher cornerstone investor stake.

Cornerstone shareholders, all Chinese institutions, bought about 67% of the stock on offer in the IPO, up from the 58% stake flagged in the company’s first attempt.

Institutional investors placed orders for just 1.5 times the amount of stock on sale in the international tranche, regulatory filings with the Hong Kong Stock Exchange show.

Analysts said it was one of the poorest take up rates for a major deal in Hong Kong this year.

The retail oversubscription rate was 5.12 times, which analysts said was also low for a Hong Kong IPO.

“We think the exclusion of U.S. investors from the IPO led to poor international subscription,” said Shifara Samsudeen, LightStream Research analyst who publishes on SmartKarma.