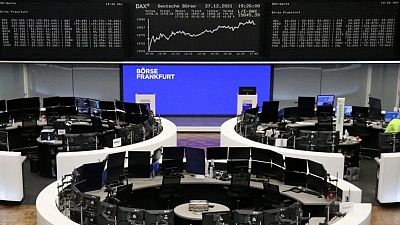 The pan-European STOXX 600 slipped 0.1% with healthcare stocks Novo Nordisk, Novartis and Roche among the biggest drags on the index, although the technology sub-index fell the most, down 1.1%.

Global COVID-19 infections hit a record high over the previous seven-day period, Reuters data showed on Wednesday, as the Omicron variant raced out of control, keeping workers at home and overwhelming testing centres.

“Europe’s restrictions will have a tail impact, but for now, markets are overwhelmingly pricing in the (Omicron) variant as a milder incarnation, despite its easier contractibility,” said Jeffrey Halley, senior market analyst at OANDA.

Wall Street strengthened, however, and oil prices edged higher as optimism outpaced concerns around the impact of Omicron on global economies.

Britain’s FTSE 100 jumped 0.6% on higher oil prices and as traders ruled out a lockdown in the country before the year-end. [.L]

“With market activity reduced for the holiday season, investors continue to tentatively price in a global recovery hitting a minor bump, and not a pothole,” Halley added.

The STOXX 600 has largely had a bull run in 2021 in response to accommodative monetary policy and stimulus measures, with tech and financial stocks seeing the highest gains.

However, analysts have mixed views going into 2022 as inflation fears, COVID-19 risks and an energy crunch persist. Many believe inflation will pressure central banks to exit from policy accommodation sooner than expected.

Deutsche Bank fell 1.4% after the German financial regulator said it had fined the bank about $10 million for controls related to the Euro Interbank Offered Rate, a setback for the nation’s largest lender in its attempts to restore its reputation.

Germany’s BMW fell 0.8% on plans to create up to 6,000 jobs next year to prepare for growing demand for its electric vehicles, the carmaker’s chief executive told daily Muenchner Merkur.