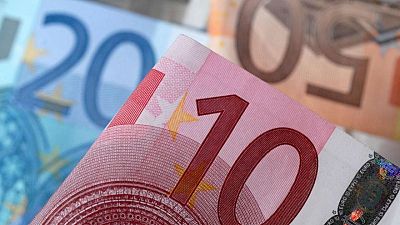 -German government bond yields steadied on Tuesday on fading concerns about the economic impact of the pandemic, while investors focused on tapering of central bank monetary stimulus.

“We continue to look at Omicron as a less dangerous variant; if that isn’t the case, we will probably have to change our forecasts,” Andrea Delitala, head of euro multi-asset at Pictet Asset Management, said.

“The general idea is that governments will be able to deal with the pandemic, but central banks won’t change their more hawkish stance designed to fight inflation,” he added to explain the rise in yields.

Italian government bond prices outperformed their peers late on Tuesday after underperforming earlier in the session and in previous days. The 10-year yield fell 2 bps at 1.108% <IT10YT=RR> after rising as much as 3.5 bps to 1.165%.

Italy’s parliament will choose a new president in January, and former ECB chief Mario Draghi, the leading candidate, will have to leave his job as prime minister if elected.

Analysts have warned of a potential increase in the Italian risk premium should Draghi become president, as confidence in the country’s debt-ridden economy improved when he took office as prime minister in February 2021.

They see snap elections as the worst-case scenario and political uncertainty could hurt bond prices.

“We see the spread between Italian and German 10-year bond yields widening up to 150 basis points if political uncertainty about the current government’s future persists,” Pictet’s Delitala said, adding he regarded the likelihood of snap elections as very low.

Even if made president, Draghi might appoint a senior minister from his cabinet as his successor, and Italy could enjoy relatively stable politics in 2022 upon the start of Draghi’s seven-year reign as head of state.

The spread between Italian and German 10-year yields was at 133.7.

Last week, France and Italy called for the EU’s fiscal rules not to prevent member states from making investments, adding that the EU’s 800 billion recovery fund has been a success that should serve as a blueprint for the future.