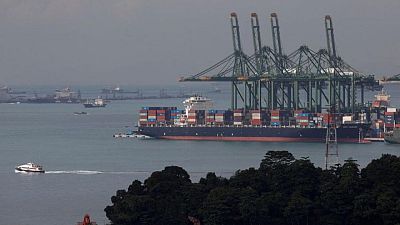 LONDON – Ocean freight costs are likely to remain high in 2022 as investors and regulators scramble to accelerate decarbonisation of the shipping industry and companies grapple with green financing, sources say.

Shipping, which transports about 90% of world trade and accounts for nearly 3% of the world’s CO2 emissions, is under growing pressure from environmentalists to deliver more concrete action including a carbon levy.

The International Maritime Organization (IMO), the UN’s specialist shipping agency, has said it has made progress on short-term greenhouse gas (GHG) reduction measures.

But that timeline is not seen as fast enough by environmentalists and a number of the IMO‘s 175 member countries.

“At the MEPC (IMO committee) meeting in June next year there will be a lot of heat and pressure on regulators to ensure that they come prepared to negotiate a solution rather than kicking the can down the road because of misalignment or negotiation tactics. It is really not acceptable,” said Christian Michael Ingerslev, chief executive of Maersk Tankers.

Last month countries including the United States at the COP 26 climate summit pushed for the IMO to adopt a zero emissions target by 2050.

“As far as the IMO is concerned, the negotiations process in 2022 will likely be very slow and onerous,” said Faig Abbasov with green group Transport & Environment.

“The problem is in the very belief that a U.N. organisation with 175 members can come together and take tough decisions to decarbonise an entire economic sector.”

The IMO said concrete progress was made in 2021 on combating climate change including new regulations to improve the energy efficiency of the world fleet, adding that it would “work very hard” next year on the development of a revised GHG strategy, which will be finalised in 2023.

“Where this is willingness to act, then processes can move faster,” said Roel Hoenders, head, air pollution and energy efficiency with the IMO.

A proposal submitted at the IMO to create a $5 billion research and development fund to find the right technology to meet the targets is still under discussion with further talks kicked forward to next year.

Underscoring the challenges ahead will be the impact on poorer countries such as Pakistan.

“Developing countries cannot afford to spend on the type of infrastructure needed and therefore, developed countries must support the process at the IMO,” he told Reuters referring to the R&D fund.

Financing the path ahead is another hurdle. Shipping will need $2.4 trillion to achieve net-zero emissions by 2050, with around $500 billion required by 2030, according analyst estimates.

“Certainly, the European banks at least and not far behind the American banks will have to meet criteria that satisfy sustainable finance,” said Tony Foster, chief executive of specialist asset manager Marine Capital.

“When it comes to new assets it is going to be increasingly difficult to fund anything that does not quite qualify and the same will be true, perhaps even more so, with existing assets.”

Darren Maupin, founder of leading fund manager Pilgrim Global, said companies in the shipping sector were grappling with how to secure finance with more ESG pressure.

“Capital is afraid – how do you invest in a 25-year asset when you have no idea what the IMO is going to do in five years,” Maupin said.

“The industry has a far reduced ability to build ships and limited capital available to do so. Simple supply-demand suggests rates are going to be higher and the industry is going to have to generate more capital to fund itself.”