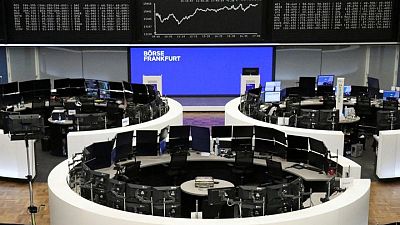 -European shares ended on Wednesday at near one-week highs, led by gains in technology and industrial stocks, even as investors worried about the outlook for global recovery amid a rise in COVID-19 cases due to the Omicron variant.

The pan-European STOXX 600 climbed 0.8%, adding to a 1.4% jump in the previous session, which was also its best day in two weeks.

Global markets have been on edge this month as the rapidly spreading Omicron strain of the coronavirus has pushed some countries to reimpose restrictions on daily life, disrupting travel and hampering economic activity.

“There’s a lot of treading water going on and waiting for the Omicron storm to hit, as a lot of traders are hanging onto every bit of scientific data around the severity of the new strain,” said Susannah Streeter, senior investment and markets analyst at Hargreaves Lansdown.

“It’s going to be a very cautious mood for equities, rather than any kind of euphoria, heading into Christmas.”

Thin liquidity and risk associated with Omicron’s spread have led to volatility in the benchmark index in recent days.

Meanwhile, the European Central Bank could raise rates as soon as the end of next year, and heralding an end to ECB bond purchases would be a strong signal that the move is coming in the next two quarters, Governing Council member Robert Holzmann said.

The ECB at its last meeting promised to provide monetary support by temporarily doubling its asset purchases before it ends its emergency bond buys by next March.

Germany’s benchmark index firmed 1% even with its government set to introduce new measures to curb the spread of COVID-19 before New Year’s Eve, including limiting private gatherings for vaccinated people to a maximum of 10 people.

Scotland, Ireland, Portugal, the Netherlands and South Korea have reimposed COVID-19 lockdowns or other restrictions on activity in recent days.

Among stocks, Germany’s Delivery Hero jumped 7.4% to the top of the STOXX 600 after saying it would scale down its Foodpanda operations in the country and sell the subsidiary’s Japan unit.

Norway’s Aker BP dropped 6.9% and was at the bottom of the STOXX 600 with Lundin Energy after it announced plans to buy the oil and gas business of the Swedish firm.