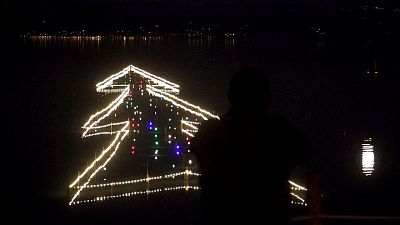 JERUSALEM – Crusader-era bells and organ pipes from the Church of the Nativity in Bethlehem are inspiring researchers’ efforts to re-create music as it may have sounded in the birthplace of Jesus during almost 800 years ago.

Worried they might otherwise be destroyed, mid-13th century Crusaders buried the 13 bronze bells near the church on the eve of a Muslim offensive, slathering them in animal fat to protect them from rust, said David Catalunya, who is leading a project to build facsimiles of them.

“It’s a very long process, not only in terms of constructing the materiality of the instruments but also its cultural context and its intellectual context,” said Catalunya, a researcher from the universities of Oxford and Wuerzburg, Germany.

With the exploratory research phase complete, he estimates it will take about five years to cast fully functioning copies.

Meanwhile, a knock of the knuckles is enough to bring a clear, high-pitched chime from the originals, whose clappers have long since rotted away – as demonstrated to Reuters at the Custody of the Holy Land for the Roman Catholic church, which holds the unique collection.

“It’s half of the original sound, (which) was much richer and louder and a little bit lower,” Catalunya said.

The bells were part of a carillon that accompanied chants inside the church, said Franciscan friar Father Stephane, the Custody’s liturgist.

They were discovered in the early 20th century, along with 222 Mediaeval copper pipes from the Church of the Nativity’s organ, during construction at the church’s Franciscan compound, Father Stephane said.

The collection also includes the sceptre of the Bishop of Bethlehem and candlesticks from the 12th century which, according to Catalunya, were made in France, suggesting a shared provenance with the bells and organ pipes, which Father Stephane says are the oldest in Christendom.

Father Stephane said he hoped the collection would be displayed, and played, at a Jerusalem museum the Custody plans to open by 2024.

“These bells are very significant for us because they are the bells of Bethlehem (and a) symbol of Nativity in the Christian world,” he said.