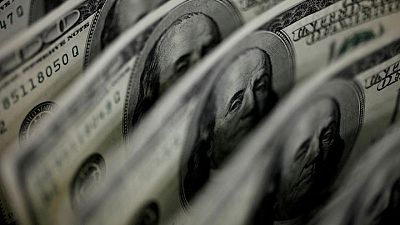 NEWYORK -The dollar edged lower on Monday as traders sent midterm U.S. Treasury yields lower following a blow to prospects for approval of Democratic climate and social spending legislation in Washington and on concerns about the continued spread of the Omicron coronavirus variant.

“I think it is a lot of year-end flows right now,” said Kathy Lien, managing director at BK Asset Management. “With the Omicron scare, with stocks falling quite a bit, people are just liquidating and squaring off for the year.”

U.S. Senator Joe Manchin, a conservative Democrat who is key to President Joe Biden’s hopes of passing a $1.75 trillion domestic investment bill, said on Sunday he would not support the package, drawing a sharp rebuke from the White House.

Manchin appeared to deal a fatal blow to Biden’s signature domestic policy bill, known as Build Back Better, which aims to expand the social safety net and tackle climate change.

For Treasury investors, the development likely meant the issuance of less government debt and possibly less pressure on the U.S. Federal Reserve to raise interest rates. The yield on the three-year Treasury note was at 0.8936%, down 3.2 basis points in late afternoon trading.

With last week’s slew of major central bank meetings out of the way, investors turned their focus to the rapid spread of the Omicron variant.

The Netherlands went into lockdown on Sunday and local newspapers in Italy reported that new restrictions were being considered there, too.

“Investor risk sentiment has been undermined by further evidence over the weekend of the disruptive impact of the new Omicron COVID variant,” MUFG currency analyst Lee Hardman wrote in a note to clients.

Concerns that further curbs could be imposed in Europe to contain Omicron also weighed on investors’ appetite for riskier currencies.

The British pound fell 0.3% to a five-day low, struggling to hold above $1.32 against the dollar as a risk-off mood swept through financial markets and as pressure grew on policymakers to slow the spread of Omicron.

Turkey’s lira mounted a massive turnaround late on Monday after President Erdogan introduced a series of steps that he said will ease the burden of the ailing currency on Turks, while vowing to press on with the low rates policy that led to the currency slide.