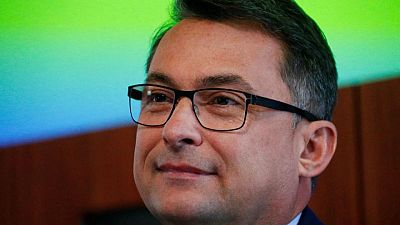 Nagel, a former Bundesbank board member, will take over on Jan. 1 from Jens Weidmann, who quit five years early after a decade of fruitless opposition to the European Central Bank’s aggressive stimulus policy of sub-zero interest rates and massive purchases of government bonds.

The 55-year old economist will take charge of the euro zone’s biggest national central bank at a tense moment. Inflation is more than twice the ECB 2% target, and opposing camps within the ECB‘s Governing Council have distinctly different views on its likely evolution.

“In view of inflation risks, the importance of a stability-oriented monetary policy is growing,” Lindner said on Twitter. “Nagel is an experienced person, who ensures continuity at the Bundesbank.”

Weidmann unsuccessfully opposed the ECB‘s decision in his last meeting on Thursday to extend stimulus and warned that inflation could exceed the ECB‘s benign projections.

A former board member of the state-owned development bank KfW Bank, Nagel currently works for the Bank for International Settlements, which is often considered the central bank of central banks.

Early in his career, he was also a consultant for the SPD, the party that took over government earlier this month and will make the Bundesbank appointment one of its first decisions.

Although he has not publicly expressed views on monetary policy for years, speeches he gave as a Bundesbank board member show he adhered to the German central bank’s tough stance on inflation and emphasis on market discipline for banks and governments.

“Nagel can be trusted to continue the German Bundesbank tradition in the debates in the ECB,” Friedrich Heinemann, an expert at the ZEW economic research institute, said. “He has extensive monetary policy and financial expertise, which is essential for today’s complex monetary policy decisions.”

Heading the Bundesbank, Nagel would join Isabel Schnabel, who was also thought to be in the race for the Bundesbank job, on the ECB‘s Governing Council as one of two Germans.

“Congratulations to Joachim #Nagel for being nominated as new President @bundesbank!” Schnabel wrote on Twitter. “There are many important tasks ahead of us.”

Marcel Fratzscher, the head of economic research institute DIW Berlin and another possible candidate, said Nagel was “a great and smart economist who will represent Germany well”, also thanks to his expertise in “financial markets and financial stability”.

Germany has often been at odds with the ECB and the bank has repeatedly come under fire from government officials, the media and academics for policies they claimed helped weaker economies at the expense of ordinary Germans.

Their criticism, however, has often fallen on deaf ears at the ECB‘s Governing Council, where the majority of policymakers have backed the central bank’s aggressive stimulus policy.

“Nagel’s appointment does not change the majority structure in the Governing Council,” said professor Stefan Kooths of the non-profit Kiel Institute for the World Economy (ifw). “The proponents of the loose monetary policy can therefore look forward to the new Bundesbank leadership in a relaxed manner.”

Often in the minority, German policymakers have responded by quitting from the Bundesbank and the ECB board, with nearly half a dozen top officials leaving in just over a decade after unsuccessfully opposing ultra-easy ECB policy.

“Our best guess is that Nagel will largely follow Weidmann in being a flexible and cooperative hawk,” JPMorgan economist Greg Fuzesi said. “Weidmann has certainly been very hawkish, but he has played a constructive role in the ECB’s decisions and has accepted decisions that were taken.”