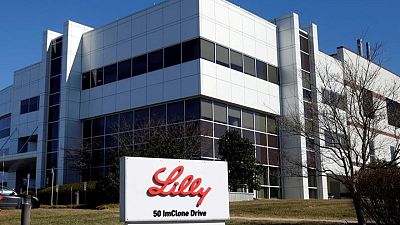 – Eli Lilly on Wednesday forecast 2022 profit above Wall Street estimates as it bets on new drug approvals to counter the impact of competition and pricing pressures on its other key treatments, sending its shares up nearly 10%.

The company has plans to launch five more medicines over the next two years, including diabetes drug tirzepatide and Alzheimer’s disease treatment donanemab, helping it meets its target of launching 20 new medicines over a 10-year period through 2023, Lilly said.

“We believe the continued uptake of our key growth products … coupled with our anticipated upcoming launches will allow Lilly to deliver top-tier, volume-driven revenue growth through at least 2030,” CFO Anat Ashkenazi said.

Lilly also raised its current-year expectations for profit and sales, helped partly by a recent U.S. government contract for the supply of its COVID-19 antibody treatment.

Last month, the U.S. government bought 614,000 additional doses of its COVID-19 antibody therapy, a cocktail of bamlanivimab and etesevimab, for $1.29 billion.

The company said it now expected COVID-19 therapies to bring in sales of about $2.1 billion in 2021, up from an earlier forecast of $1.3 billion.

Lilly looks set for an “exciting future” with both donanemab and tirzepatide expected to receive approval next year, Third Bridge senior analyst Mikaela Franceschina said in an e-mailed statement.

“Donanemab has been keenly watched since the controversy around Biogen’s Aduhelm. Our experts say donanemab could theoretically benefit a larger patient population than Aduhelm and pose a substantial threat to Aduhelm’s future.”

Aduhelm, approved in June for treating the memory-robbing disease, is battling slow uptake as experts have questioned the FDA‘s rationale for clearing the drug without more definitive proof of benefit.