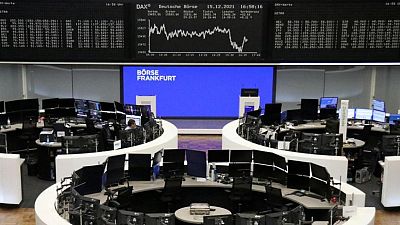 -European shares had their best day in more than a week on Thursday, led by gains in banks and miners after the European Central Bank promised continued support to the economy, still choosing to incrementally withdraw stimulus.

The ECB only slightly reined in stimulus, as it strives for sustainable economic growth, saying it would wind down its 1.85 trillion euro Pandemic Emergency Purchase Programme by March.

But the central bank plans to double bond buys to 40 billion euros under the longer-running Asset Purchase Programme in the second quarter before cutting them to 30 billion euros in the third quarter.

“Despite a somewhat faster transition phase after PEPP ends, the open ended nature of purchases should be seen as a sign that the ECB is still significantly more dovish than its peers,” Rabobank analysts said in a note.

“While the new inflation projections are significantly higher, at 1.8% the medium-term forecasts still fall short of the levels needed for sharper policy tightening.”

The ECB decision came shortly after the Bank of England became the first major central bank to raise borrowing costs since the pandemic began, hiking rates to 0.25% from 0.1%.

That pushed Britain’s benchmark bond yields slightly higher to 0.75%. HSBC Holdings, Lloyds and Barclay’s jumped between 3.2% and 4.6% and were among the top boosts on the FTSE 100 index.

On Wednesday, the U.S. Federal Reserve flagged a long-awaited end to its pandemic-era bond purchases in March and signalled as many as three rate hikes in 2022, but delivered an otherwise upbeat economic outlook.

The healthcare sector was lifted by 5.7% surge in Novartis AG after it launched a new share buyback of up to $15 billion.

AstraZeneca gained 2.2% after saying a lab-study of its COVID-19 antibody cocktail, Evusheld, found that the treatment retained neutralising activity against the Omicron coronavirus variant.

Airbus SE rose 2.4% after Australia’s Qantas Airways chose the planemaker as its preferred supplier for its domestic fleet and Air France KLM struck a deal for dozens of narrowbody jets.

French power giant EDF plunged 15.5% after it found faults at a nuclear power station and shut down another plant using the same kind of reactors.