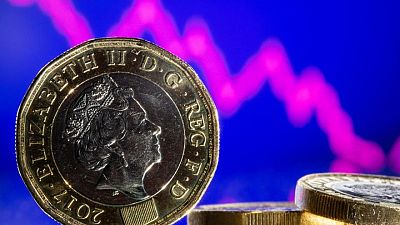 -Sterling jumped to December highs versus the euro and the dollar on Thursday after the Bank of England surprised investors by hiking interest rates, while the European Central Bank announced a reduction of its monetary stimulus.

Britain became the first G7 economy to hike rates since the onset of the pandemic, and the U.S. Federal Reserve also signalled plans to tighten policy in 2022, while the ECB only slightly reined in stimulus.

It hit its highest levels since the end of November versus the euro and the dollar respectively, at 84.54 pence and 1.3375.

Several analysts had flagged that BoE could allocate more significance to the pandemic at its policy meeting, despite recent robust economic data.

Daily hospital admissions in Britain could soon hit a new high because the Omicron variant of the coronavirus is spreading so fast, piling pressure on a health service struggling with staff sickness, England’s Chief Medical Officer said on Thursday. [nL8N2T140H]

“The announcement does look like a bit of a panic move – the Bank of England is probably regretting its decision not to move last month when Omicron wasn’t even an issue,” said Chris Beauchamp, chief market analyst at IG Group.

Data on Wednesday showed British consumer price inflation leapt by far more than expected and hit a decade-high 5.1% in November.

Political risks continue to weigh on sentiment as Prime Minister Boris Johnson faces turmoil in his Conservative Party over measures to curb the COVID-19 outbreak’s spread and a public outcry over alleged office parties at Downing Street during last year’s lockdowns.

Voters went to the polls in a region of central England to elect a new member of parliament in a test of British Prime Minister Boris Johnson’s authority after accusations of sleaze and his handling of the COVID-19 pandemic. [nL1N2T11J4]