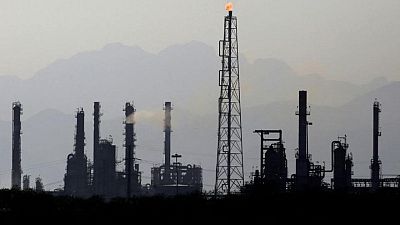 NEWYORK -Oil prices fell for a third consecutive day on Wednesday on growing signs that supply growth will outpace demand next year, and as the World Health Organization (WHO) said COVID-19 vaccines may be less effective against the Omicron variant.

The market pared the day’s losses after U.S. crude inventories fell more than anticipated and implied consumer demand surged to a record in the most recent week in the United States, the world’s largest oil consumer.

“The oil market continues to wrestle between a recovery in demand and the fear that the recovery will be negatively impacted by the Omicron virus,” said Andrew Lipow, president at Lipow Oil Associates in Houston.

“It’s the first bullish report in quite some time,” said Bob Yawger, director of energy futures at Mizuho.

That said, oil analysts anticipate the Omicron variant will curb demand in the coming months.

The WHO said preliminary evidence indicated vaccines may be less effective against infection and transmission linked to the Omicron variant, which also carries a higher risk of reinfection.

U.S. officials said on Wednesday that coronavirus cases are on the rise, but said the combination of the two-shot vaccine and booster does still neutralize the disease.

Consumers have already started to alter travel plans and airline spending was declining as of last week, Bank of America research showed.

The International Energy Agency (IEA) said on Tuesday a surge in COVID-19 cases would dent global demand for oil while crude output is set to increase, especially in the United States, and supply is set to exceed demand at least until the end of next year.

In contrast, the Organization of the Petroleum Exporting Countries (OPEC) on Monday raised its world oil demand forecast for the first quarter of 2022.