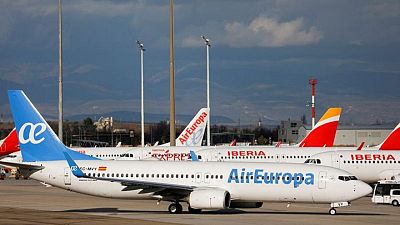 LONDON – Airline group IAG is set to cancel its takeover of Air Europa after European regulators indicated they would not allow it to go through without further concessions, though CEO Luis Gallego hasn’t given up hope of some sort of tie-up.

After IAG finance chief Stephen Gunning announced that the group was in advanced negotiations to cancel the acquisition, Chief Executive Luis Gallego said the COVID-19 pandemic meant the deal no longer worked but that IAG was assessing whether there were other options for a tie-up.

“Air Europa, let’s see if finally we can find a way to do it,” he told the online Capa Live conference.

“We are not going to continue with the current structure, we are trying to have a new structure that (will) allow this deal to happen.”

While most observers expected IAG to pull the deal once the pandemic struck, it instead agreed to cut the price in half to 500 million euros ($563.6 million) and negotiated to defer payments for six years.

European competition regulators, however, were concerned that the takeover would reduce competition in the Spanish domestic market and on international routes to the country.

The remedies offered by IAG – to give up 13 short and medium-haul routes and two long-haul routes at Madrid and Barcelona airports – were not enough to assuage the concerns and a veto was likely, sources have said.

As well as BA and Iberia, which is the market leader between Europe and South America, IAG also owns Irish carrier Aer Lingus and Barcelona-based Vueling and Level.

Shares in IAG fell 1.6% in early trading, with Citi analysts saying they believed the decision to cancel the deal was widely expected, given the regulatory hurdles thrown in its path by the European Commission and the UK’s Competition and Markets Authority (CMA).

By walking away before the deal is vetoed by regulators, IAG will be better positioned to make another attempt in the future, sources said.