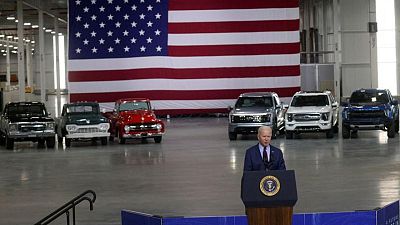 MEXICOCITY/TAKOMAPARK, Md. – Mexico is not ruling out the possibility of appealing to an international panel over tax incentives proposed by the United States for some U.S.-made electric vehicles, President Andres Manuel Lopez Obrador said on Tuesday.

Mexico has promised to review a range of legal actions in response to a new U.S. tax incentive that Mexican officials say is “discriminatory” and contrary to free trade, including the new United States-Mexico-Canada Agreement (USMCA) trade pact.

When asked about the incentive, Lopez Obrador reiterated that his government opposed the plan, arguing the subsidy would threaten Mexico’s auto industry and contravene USMCA rules.

“We’re already taking steps to ensure this subsidy is not applied, and we’re not ruling out the possibility of presenting an appeal as established in the treaty so that this complaint can be heard by an international panel,” he said.

Lopez Obrador added that “there is agreement” with Canada, without giving further details.

Canada on Monday proposed aligning its electric vehicle tax policy with that of the United States to settle the U.S. tax credit dispute.

Canada said it is ready to launch a dispute settlement process under USMCA over the tax credit, fearing it will undermine its own efforts to produce electric vehicles in Ontario – the country’s industrial heartland – and also undermine the integrated North American auto industry.

On Friday, Canada warned that if the EV tax credit were implemented it would “forcefully respond” by… “applying tariffs on American exports.”

U.S. Energy Secretary Jennifer Granholm said Tuesday she has been in contact with Canadian officials about the EV tax credit. “I know this is the subject of negotiation” in the U.S. Senate, which is still debating the tax credit. “We’ll see what’s worked out between the White House and the Senate.”