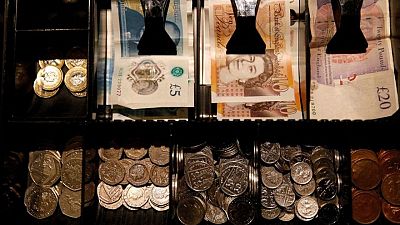 LONDON -Sterling was pushed higher by a weaker dollar on Tuesday but little changed against the euro, as uncertainty around the Omicron variant of COVID-19 limited the market impact of strong UK jobs data.

Since the first Omicron cases were detected on Nov. 27 in Britain, the UK has imposed tougher restrictions. But Prime Minister Boris Johnson faces a large rebellion among his Conservative lawmakers in a parliamentary vote over the measures later on Tuesday.

On Sunday, Johnson said that Britain faces a “tidal wave” of the variant and on Tuesday he warned ministers that there will be a “huge spike” in cases.

The pound fell on Monday due to Omicron fears but on Tuesday it was little changed against the euro, at 85.385 pence per euro.

Versus the dollar, it was up 0.3% at $1.32530, pushed higher by a slip in the dollar. However, the dollar was still near one-week highs, supported by its role as a safe-haven currency, as well as expectations that the U.S. Federal Reserve would be hawkish at is meeting this week.

The spread of the Omicron variant has raised fears of an economic slowdown, prompting investors to bet against the Bank of England raising rates at its meeting on Thursday.

“Nobody expects anything from the MPC (Monetary Policy Committee) on Thursday,” said Kit Juckes, head of FX strategy at Societe Generale, who said he expected sterling to stay steady for the rest of the session.

“The fact of Omicron just means that if it wasn’t a bad idea to do something about monetary policy in December already, it’s a completely daft idea now.”

“Omicron adds both a significant layer of uncertainty and a layer of downside risk for the economy, clearly.”

The pound barely reacted to strong UK jobs data earlier in the session, which showed that British employers hired a record number of staff in November, suggesting that the labour market withstood the end of the government’s furlough scheme.

“The economic outlook has been overtaken by Omicron concerns, and we continue to expect no change in (monetary) policy this week,” TD Securities strategists said in a client note.

But the BoE is under pressure to address fast-rising inflation. The International Monetary Fund warned the central bank to avoid an ‘inaction bias’ in its approach to combating price pressures. UK inflation data is due on Wednesday.

“While England’s fresh Plan B measures (against COVID-19) are quite light touch for now, the fact they come without any fiscal support introduces some fresh uncertainty on the jobs front going forward,” Deutsche Bank strategist Shreyas Gopal said in a note to clients.

Deutsche Bank still expected a rate hike, but Gopal said he did not expect sterling to move significantly in either direction if the BoE hikes or holds rates.