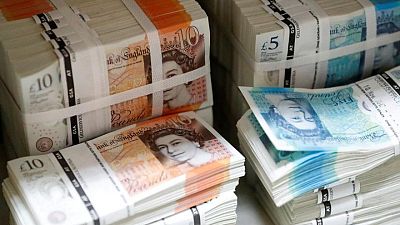 LONDON – Sterling traded lower on Monday as Britain braced for a “tidal wave” of the Omicron coronavirus variant and investors took the view the Bank of England would keep interest rates on hold to assess its economic impact before tightening monetary policy.

British Prime Minister Boris Johnson warned of an incoming surge in infections and said at least one patient had died in the United Kingdom after contracting the Omicron variant.

Before the death was announced, Britain said 10 people had been hospitalized with the Omicron variant in various parts of England. Their ages ranged from 18 to 85 years and most had received two vaccination doses.

Health Secretary Sajid Javid also told parliament that the variant was spreading swiftly and would become the dominant variant in the British capital in the next 48 hours.

BoE policy makers meet on Thursday to decide whether to tighten monetary policy to keep inflation in check but the resurgent COVID-19 pandemic has prompted traders to price in a status quo rather than a rise in interest rates.

“Markets do not expect the Bank of England to move given the economic uncertainties created by omicron”, UBS Global Wealth Management Chief Economist Paul Donovan wrote in a note.

The government wants to offer all adults a booster by New Year, an ambitious target because the Christmas holiday is approaching and vaccinating 1 million people per day is around double the current rate of 530,000 per day.

Pressure on the pound is also due to political risk.

Johnson faces a rebellion in his Conservative Party over measures to curb the spread of the Omicron variant and an outcry over alleged parties at his Downing Street office during last year’s lockdowns.

“We now believe there is a 40% probability that Johnson is replaced at some point next year”, analysts at Eurasia group estimated.

Since the first Omicron cases in the United Kingdom were detected on Nov. 27, scientists have lifted the COVID-19 alert level to four on a five-point scale and Johnson has imposed tougher restrictions.

The Omicron variant, reported in more than 60 countries, poses a “very high” global risk, with some evidence that it evades vaccine protection, the World Health Organization says.