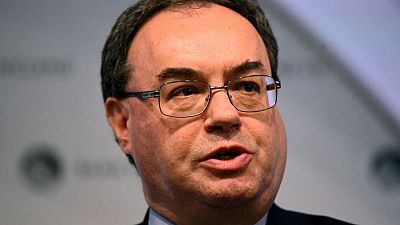 LONDON -Bank of England Governor Andrew Bailey warned banks and other regulated financial firms on Monday that they should be “especially cautious” about holding volatile cryptoassets until regulators put new rules in place.

Bailey, speaking at a news conference, said future rules for cryptoassets – the BoE’s preferred term for financial instruments such as bitcoin – would balance risk management with the need to support innovation and competition.

“The FPC considers that financial institutions should take an especially cautious and prudent approach to any adoption of these assets until such a regime is in place,” he said after a meeting of the BoE’s Financial Policy Committee (FPC).

Although no major British banks have reported direct exposure to cryptoassets as yet, some are starting to offer a variety of services, such as cryptoasset derivatives trading or custody services, the FPC said.

The crypto market continues to grow rapidly, increasing tenfold since early 2020 to about $2.6 trillion last month, equivalent to 1% of global financial assets, the FPC said.

“It probably isn’t a financial stability risk today but it has all the makings of something that could become one,” Bailey said.

The Basel Committee of global banking regulators has set out proposals for punitive capital charges on cryptoassets held by banks.

But Bailey said there was a need to look beyond banks to the wider “non-bank” financial world when considering rules.

“Enhanced regulatory and law enforcement frameworks, both domestically and at a global level, are needed to influence developments in these fast-growing markets,” the FPC said.

The BoE does not view bitcoin or other cryptocurrencies as meeting the general definition of a currency, and reiterated a warning that cryptoassets had no intrinsic value and that investors could lose all their money.

British regulators estimate that 2.3 million adults in Britain own cryptoassets such as bitcoin, but they still only account for 0.1% of households’ net financial wealth.

The Financial Conduct Authority said last week that investments in cryptoassets should not be protected by Britain’s Financial Services Compensation Scheme.