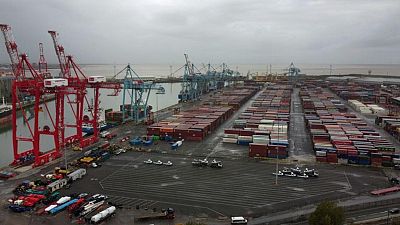 LONDON – Britain’s trade performance is lagging increasingly behind that of other similar economies, according to data that suggest Brexit has had a detrimental effect on exports, on top of the COVID-19 pandemic.

Britain is the only Group of Seven advanced economy to have failed to regain the level of goods exports seen in late 2018, according to official data published by each country, including British data on Friday.

British goods exports in October stood 5.1% below their level in late 2018 – the last year of relatively normal trade flows not affected by stockpiling ahead of various Brexit deal deadlines.

The next worst performer, France, had goods exports in October worth 1.6% more than their late-2018 level. The best performer, the United States, showed comparable growth of 16.6%.

(For graphic on, UK goods exports lag behind other G7 countries: https://fingfx.thomsonreuters.com/gfx/polling/xmvjonjbrpr/Pasted%20image%201639146093708.png)

The British Chambers of Commerce, an employers’ group, saw a warning sign in the latest figures.

“Although the data is a one-month snapshot it feeds into a detectable trend of a levelling off of the recent improvement in UK-EU trade in goods following a very difficult start to 2021,” said William Bain, the BCC‘s head of trade policy.

British goods exports to the European Union in October, excluding precious metals, stood 8% below their 2018 level, the Office for National Statistics data showed on Friday.

Supporters of Brexit say Britain will, in the long run, be better able to tap into faster-growing markets than when it was in the EU. Many economists are sceptical that this will make up for lost trade with the bloc.

Other indicators of trade have also pointed to a level of weakness that is unique to Britain.

The monthly IHS Markit surveys of manufacturers around the world showed only British factories reported a decline in export orders in November and October, out of more than a dozen developed markets in the survey.

“UK manufacturers reported weaker demand from China, disruption to trade with EU nations – in part due to ongoing Brexit complications – and the cancellation of some orders due to long lead times,” IHS Markit said.