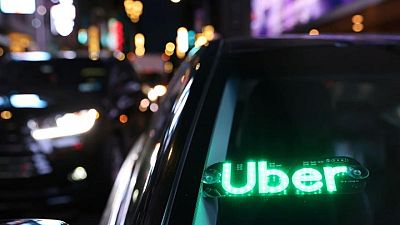 BRUSSELS – The European Commission announced draft rules on Thursday to give many drivers for online firms such as Uber and Deliveroo employee benefits, a move labour unions say is overdue but some companies argue will lead to job losses.

The proposal, a global first that needs to be thrashed out with EU countries and lawmakers before it can become law, marks the latest attempt by the European Union to regulate tech companies and ensure a level playing field between online and traditional firms.

“No one is trying to kill, stop or hinder the development of the platform economy,” Jobs and Social Rights Commissioner Nicholas Schmit said at a news conference introducing the proposals.

However, the rules were needed to ensure that new business models uphold labour laws, he said.

The EU executive said the draft rules could apply to around 4.1 million of the 28 million workers at online platform companies across the 27-country bloc.

Internet firms that set pay and standards of conduct for their couriers would have to classify them as employees entitled to a minimum wage, paid holidays and pension rights, according to the draft rules.

Online food ordering and delivery companies, which are generally loss-making in an industry seen as ripe for consolidation, have fought court cases around Europe and the United States to have riders and drivers classified as self-employed contractors, rather than employees – with mixed results.

However, “Delivery Platforms Europe”, a lobby group that includes Uber, Deliveroo, Glovo and Delivery Hero, said in a statement that what part-time drivers wanted most was flexibility on their working hours and the rules as proposed would lead to job losses.

Petra Bolster of Dutch labour union FNV, which won lawsuits against Deliveroo and Uber over employment, noted the proposal included a list of five tests to help determine when couriers were self-employed.

“That’s naive because platforms will use that as a toolkit to get around the criteria and get away with everything,” she said. “It is their entire profit model to avoid costs of employment.”

Under the EU proposal, companies will be considered employers if they supervise the performance of workers through electronic means, restrict their ability to choose their working hours or tasks and prevent them from working for third parties.

Crucially, the proposal shifts the burden of proof onto companies when a dispute arises as to whether a worker is a self-employed contractor or an employee.

Leonid Popa, a Russian immigrant who was an Uber driver in the Netherlands for four years, said the idea he had been self-employed had been a “fiction” but he was left without work and forced to seek government assistance when the COVID-19 pandemic struck.

“The whole story was nonsense. There was no flexibility, you don’t earn much, you have to work more than 40 hours to earn a basic living and there’s just really no feeling of security,” he said, adding that he hoped better regulation would help his former colleagues.

Giles Thorne, an analyst for Jefferies, said the EU proposal would not destroy online ordering and delivery models, which were here to stay, but would give a little more power to couriers.

For consumers, the long-term result of European protections for workers would likely be a small increase in either prices or delivery fees.

But “I would bet my bottom dollar that people keep ordering bento boxes online”, Thorne said.