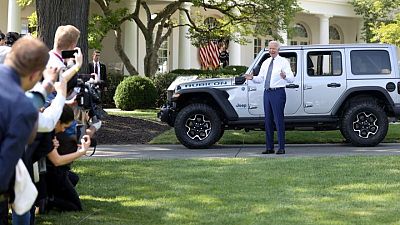 WASHINGTON – U.S. President Joe Biden on Wednesday will sign an executive order vowing to transition to the acquisition of only zero-emission vehicles by 2035 for the federal vehicle fleet, the White House said.

In January, Biden vowed to replace the U.S. government’s fleet with electric models.

“The federal government also owns an enormous fleet of vehicles, which we’re going to replace with clean electric vehicles made right here in America made by American workers,” Biden said.

Biden in August signed an executive order aimed at making half of all new vehicles sold in 2030 electric, which also includes plug-in hybrid electric models that also have a gasoline engine.

The 50% target, which is not legally binding, won the support of U.S. and foreign automakers, which said that achieving it would require billions of dollars in government funding.

Biden has resisted calls to follow California, which plans to phase out the sale of new light-duty gas-powered vehicles in 2035.

As of 2019, the U.S. government owned 645,000 vehicles that were driven 4.5 billion miles consuming 375 million gallons of gasoline and diesel fuel, according to the General Services Administration (GSA). The U.S. government spent $4.4 billion on federal vehicle costs in 2019, the GSA said.