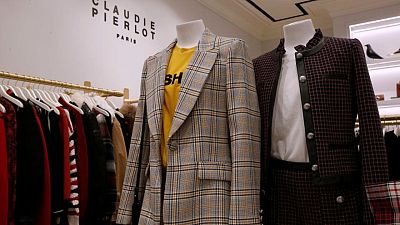 PARIS – An ownership battle at SMCP heated up on Wednesday as major shareholders claimed a 16% stake in the French fashion group had been illegally transferred to an offshore account, and a meeting to force a boardroom reshuffle was called for next month.

The transfer was allegedly carried out by SMCP‘s previous Chinese owner for the sum of 1 euro to an entity in the British Virgin Islands belonging to current SMCP board member Chenran Qiu, according to a statement issued Wednesday by Glas, a company representing SMCP shareholders.

Glas, which includes asset manager Blackrock and an affiliate of private equity firm Carlyle, said a commercial court in Britain had issued a worldwide freezing order to prevent the transfer of further SMCP shares.

Glas obtained a 29% stake in SMCP and 25% of its voting rights following the default of bonds issued by European TopSoho, a unit of the French group’s Chinese shareholder, the conglomerate Shandong Ruyi.

TopSoho did not respond to an email from Reuters seeking comment on Glas’s allegation.

Glas, which wants to sell its SMCP stake, has called for changes on the board, including the removal of Chenran Qiu and her father, board president Yafu Qiu.

SMCP said that, following a ruling by a Paris commercial court in favor of Glas, it would hold a shareholder meeting in January to vote on the proposed ouster of five board members. All are linked to Shandong Ruyi, according to SMCP‘s website.

Shandong Ruyi harbored ambitions of creating a luxury clothing empire and in 2015 embarked on a buying spree that, as well as SMCP – bought from private equity firm KKR in 2016 – included London-based suitmaker Aquascutum and Paris-based fashion house Cerruti 1881.

But it has struggled under the weight of its debts and its financial difficulties worsened with the COVID-19 pandemic.

SMCP, meanwhile, has seen a recovery, with third quarter revenues back close to pre-pandemic levels.