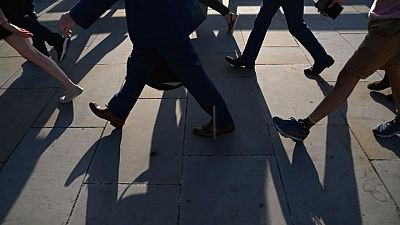 By Huw Jones and Iain Withers

LONDON – Britain’s finance firms have began issuing an array of updated work from home guidance to staff after the government toughened up rules.

But following stricter government COVID-19 guidance to work from home will be a “challenge” for accountants as they head for their busiest time of the year, auditor PwC said on Thursday.

Britain announced tougher restrictions on Wednesday, ordering people to work from home to slow the spread of the Omicron coronavirus variant.

Employees in Britain’s huge financial services sector had begun returning to the office in large numbers in recent months, with financial districts in the City of London and Canary Wharf busy in the run up to Christmas.

“As always we will follow government guidelines, but there’s no denying this will be a challenge for some sectors,” said Kevin Ellis, PwC’s chairman and senior partner.

“The majority of our people had returned to the office two to three days a week. It’s the busy season for audit and there’s also lots of deal activity that benefits from some in person meetings,” Ellis said.

PwC offices will remain open for people who have a “business or personal need to use them”, he said.

PwC, along with EY, Deloitte and KPMG are dubbed the “Big Four” and dominate auditing of blue-chip companies globally, with the year end period their busiest as accountants make checks for annual company reports ahead of publication.

EY and Deloitte said they have asked staff to comply with the government guidance, though their offices are still open for employees who need them.

“We ask anyone who comes into our offices to wear a face mask and to have taken a lateral flow test within 48 hours of coming in,” a Deloitte spokesperson said.

The City of London Corporation said the fresh restrictions will be a disappointment to business in the historic “square mile” financial district it governs.

“We will urge City businesses, workers and residents to follow the new rules,” said Catherine McGuinness, the City’s policy chair.

“But we also ask the government to set out a clear roadmap to normality early in the new year and base all decisions on data. We need to find ways to live with the virus which allows the economy to prosper,” she said.

Banks also started to issue revised guidance to staff including Deutsche Bank, which told its nearly 8,000 staff in Britain it was discouraging work social gatherings in what would usually be a busy time for Christmas parties, a source at the bank said.

Staff numbers at Deutsche Bank London offices will be significantly reduced from Monday, though employees with certain roles such as traders or those with personal reasons can still go in.

The shift also comes a day after U.S. investment bank Jefferies Financial Group told staff to work from home again and cancelled all client parties after a spate of COVID-19 cases.