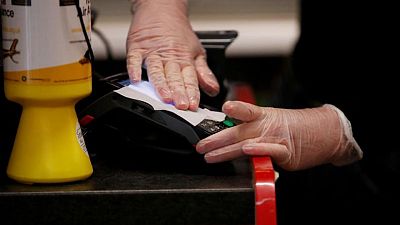 LONDON -British households ate out less and spent more on goods as the Omicron coronavirus variant spread last week, according to data on Thursday that could mean inflation stays high for longer if it marks a return to behaviour seen earlier in the pandemic.

Bank of England policymakers had been counting on a drop-off in demand for consumer goods – which soared during the pandemic and have been beset by supply-chain difficulties – to pull down rapidly rising inflation, now on course to hit 5%.

But Black Friday sales last week pushed spending on credit and debit cards in Britain to its highest level since before the first lockdown of March 2020, the Office for National Statistics (ONS) said.

Over the same period, cafe chain Pret a Manger reported a drop in sales in 8 out of 10 locations, the ONS said.

Restaurant bookings for the week to Monday fell to their lowest since restrictions on indoor hospitality eased in May, dropping by six percentage points to 5% above the equivalent figure in 2019, according to OpenTable data.

The figures pointed to a shift in consumer behaviour with the emergence of the Omicron strain of the virus, which on Wednesday prompted new health restrictions in England.

Last week, Bank of England rate-setter Catherine Mann said the Omicron variant could impede a shift in spending – away from goods and towards services like eating out and tourism – that would help to dampen inflation.

Still, BoE officials are likely to be reassured by a Bank of America survey that showed consumers’ long-term inflation expectations fell to their lowest since May.

“Rate-setters may see that as some success from their hawkish words and it may give them room to wait before hiking interest rates,” economist Robert Wood wrote in a BofA Global Research note.

The report, based on responses given before Wednesday’s announcement of renewed COVID-19 restrictions in England, showed a record 45% of Britons expect life “never” to return to normal.

The new rules fell short of a lockdown, but angered some retail and leisure businesses which said they were being hammered.

Citi said it expected the new restrictions to reduce economic growth by 0.4 and 0.3 percentage points in December and January respectively.

Financial markets now show a less than 40% chance that the BoE will hike interest rates this month to 0.25% from 0.10% – something that had been priced as a near certainty as recently as a few weeks ago.