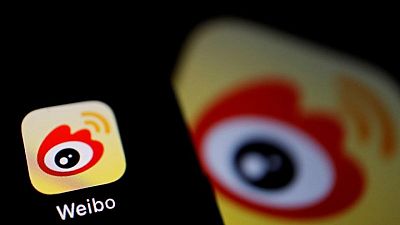 HONGKONG -Chinese social media giant Weibo Corp’s shares closed 7.2% below their issue price in Hong Kong on Wednesday, as it became the latest U.S.-listed China stock to seek out a secondary listing closer to home.

The Hong Kong debut was in line with a fall in Weibo’s primary listing in New York after a torrid week for U.S.-listed China shares, which are facing greater U.S. regulatory scrutiny and also under pressure from Chinese authorities.

The stock had been priced at HK$272.80 each in its secondary listing in which 11 million shares were sold.

“For Weibo, it’s a matter of timing. The Hong Kong market had started to rebound this week and now we are seeing some softness emerging in the market,” said Louis Tse, Wealthy Securities director in Hong Kong.

Some major stocks such as Alibaba Group Holdings, down 4.35%, were off sharply as sentiment towards tech majors remains fragile.

“Plus, there is regulatory pressure from the (U.S. Securities and Exchange Commission) on Chinese companies to disclose basically everything within three years.

“So there is a major trend that most of the U.S.-listed Chinese companies will seek secondary or dual primary in Hong Kong so they can exit the U.S. market if they need to.”

Hong Kong and China’s mainland STAR Market have attracted $15.2 billion worth of secondary listings from U.S. listed Chinese companies so far this year, according to Refinitiv data.

“The moves are probably based on the increasing recognition that the U.S.-China decoupling will not stop and will proceed steadily,” said LightStream Research analyst Mio Kato, who publishes on Smartkarma.

“I would expect a continuous flow of listings from New York to Hong Kong over the next year or two.”

The U.S administration is progressing plans to delist Chinese companies if they do not meet the country’s auditing rules, which could affect more than 200 companies.

Chinese companies https://www.reuters.com/business/us-sec-mandates-foreign-companies-spell-out-ownership-structure-disclose-2021-12-02 that list on U.S. stock exchanges must disclose whether they are owned or controlled by a government entity, and provide evidence of their auditing inspections, the Securities and Exchange Commission (SEC) said last week.