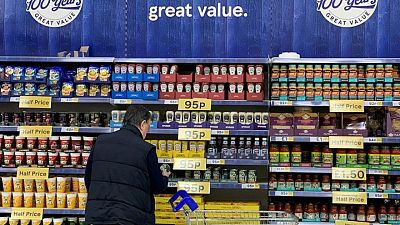 LONDON -Shares in Tesco rose on Tuesday after industry data showed Britain’s biggest retailer had gained its highest market share since February 2019, though the threat of pre-Christmas strikes has escalated.

The stock closed up 1.3%, extending 2021 gains to 23%, after market researcher Kantar showed Tesco significantly outperformed its main rivals – Sainsbury’s, Asda and Morrisons – in the 12 weeks to Nov. 28, winning 0.7 percentage points of market share in the period, its biggest jump since 2007.

While the data showed Tesco leading the pack going into the key Christmas period, a cloud on the horizon is potential strike action that could hit product availability in stores.

Tesco was already facing strikes by Unite union workers at four distribution centres in a dispute over pay.

It is now facing walkouts by more than 5,000 members of the Usdaw union at a further nine depots – Daventry, Peterborough, Hinckley and Lichfield in central England, Goole in northern England, Southampton in southern England, Livingston in Scotland and Magor in Wales.

Both unions have rejected Tesco’s offer of a 4% annual pay increase but are still talking to the retailer.

“We welcome Tesco’s offer of further talks, which start tomorrow, and we will engage positively to seek a resolution to this dispute,” said Usdaw National Officer, Joanne McGuinness.

Tesco says it has made a fair pay offer and has plans in place to help to mitigate any impact.

Asda said the GMB had recently made an additional pay claim on top of a two-year deal agreed in May.

“As our annual pay negotiations have just begun and discussions are ongoing, any talk of industrial action is premature,” said a spokesperson.

British retailers are already grappling with delays in international supply chains that are being compounded by labour shortages in domestic transport and warehousing networks, with a lack of heavy goods vehicle (HGV) drivers particularly acute.

However, both Tesco and Asda have said they are coping well.