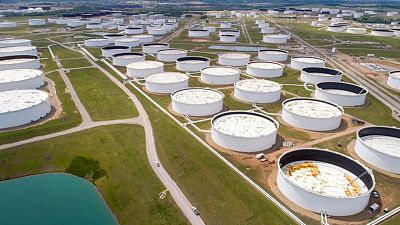 CALGARY, Alberta -Oil prices climbed by about 4% on Tuesday, extending the previous day’s almost 5% rebound on easing concerns over the impact of the Omicron coronavirus variant on global fuel demand.

Oil prices were pummelled last week by concerns that vaccines might be less effective against the new Omicron variant, sparking fears that governments could impose fresh restrictions to curb its spread and hit global growth and oil demand.

However, a South African health official reported over the weekend that Omicron cases there had shown only mild symptoms while the top U.S. infectious disease official, Anthony Fauci, also said there did not appear to be “a great degree of severity” with the variant so far.

“The market was oversold as a knee-jerk reaction to Omicron and its potential spread and impact on travel restrictions,” said Gary Cunningham, director of market research at Tradition Energy. “Now we’re seeing the market go back to expectations of strong demand over the next 6-12 months.”

In another sign of confidence in oil demand, the world’s top exporter, Saudi Arabia, raised monthly crude prices on Sunday.

That came after the Organization of the Petroleum Exporting Countries and its allies, a group known as OPEC+, last week agreed to continue raising output by 400,000 barrels per day (bpd) in January despite the release of U.S. strategic petroleum reserves.

“The market is starting to take this variant in its stride,” said Matt Smith, an analyst at data and analytics firm Kpler.

Meanwhile, a Reuters poll showed that U.S. crude inventories were likely to have fallen for a second straight week last week. Weekly industry data is due at 4:30 p.m. ET, followed by government figures on Wednesday. [EIA/S]

Oil prices were also supported by delays to the return of Iranian oil, with indirect nuclear talks between the United States and Iran having hit stumbling blocks. Germany urged Iran on Monday to present realistic proposals in talks over its nuclear programme.