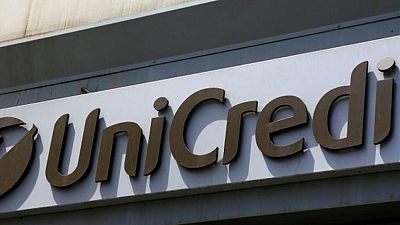 (Refiles to correct to “this week” in lead)

MILAN -Andrea Orcel must convince UniCredit investors that he can deliver on a promise to grow the Italian bank profitably when he presents its new strategy this week.

And after spurning a merger with state-owned Monte dei Paschi, the chief executive is still battling with a 40% discount to the sector as UniCredit shares trade around at around 20% below pre-COVID levels.

The pandemic had derailed plans by Orcel’s predecessor Jean Pierre Mustier for dividends and share buybacks to win over investors, but plans to return excess capital to shareholders are firmly in sight now that regulators have lifted curbs.

“A large upfront buyback, combined to 50% payout ratio would reposition UniCredit on the Olympus of capital return gods,” Mediobanca Securities analysts said ahead of the strategy presentation scheduled for Dec. 9.

After Mustier’s cost-cutting, Orcel, who was appointed CEO in April, is also expected to set UniCredit on course for revenue and profit growth.

The former head of investment banking at UBS has said he could consider mergers and acquisitions to fast-track growth, but Italy’s Treasury failed to meet his terms for MPS.

Meanwhile, a rally in takeover target Banco BPM has taken the shine off another potential deal.

While he waits for rising interest rates to boost UniCredit’s lending business, Orcel is reviewing the partnerships the bank relies upon for its fee income.

Sources have said UniCredit is set to streamline its insurance partnerships in Italy and may consider bringing in-house in two-to-three years’ time the joint-venture with CNP Assurances.

It is also renegotiating the terms of the accord with Amundi, the asset manager of Credit Agricole that acquired rival Pioneer from UniCredit in 2017.

Orcel has ruled out buying businesses that would allow UniCredit to distribute its own wealth management or insurance products.

He is working instead on smoothly plugging products supplied by partners into UniCredit’s systems under a digital revamp that constitutes a key plank of the new plan, three people with knowledge of the matter said.

Busy cleaning up their balance sheets in recent years from the debris of a deep recession, Italian banks are now stepping up IT investments to ride changes brought about by the pandemic in a country that is a European connectivity laggard.

Signalling a strong focus on technology, Orcel has named as UniCredit’s digital and information officer Jingle Pang, who oversaw the fintech transformation of Chinese insurer Ping An.

“Technology has only now become a top priority for Italian banks, they had to tackle other issues first,” said Claudio Torcellan, Oliver Wyman’s partner in charge of financial services for South Eastern Europe.

“Net interest income will recover at some point but higher rates will hurt trading gains on government bonds and possibly fees. Cost of risks is also bottoming out. IT investments will have to continue rising.”

Orcel has said he is striving to offset the cost of such investments with other savings.

UniCredit is considering 3,000 voluntary redundancies under the new plan, mostly in corporate centres, sources have said.