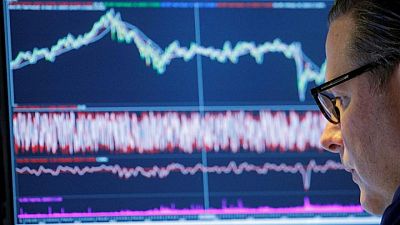 NEWYORK – Portfolio flows to emerging markets slowed by $100 billion last month from a year earlier and decelerated from October, hit by increased bets on tighter U.S. monetary policy and by weaker EM currencies, the Institute of International Finance (IIF) said.

The November 2020 monthly inflow was the largest by far on IIF records going back to 2005.

Emerging market debt pulled in $6.3 billion from foreign accounts last month, with two-thirds of the total going to China. On the equities side, EMs saw inflows of $9.2 billion, $5 billion of which went to Chinese stocks.

“Large devaluations of EM currencies, and the expectation of a Fed tightening cycle earlier than expected affected the flows dynamic,” IIF economist Jonathan Fortun said, adding that fears over a new COVID-19 variant further weakened flows at the end of the month.

Inflationary risks in the United States have tightened the timeline for tapering bond purchases and eventually rising rates at the U.S. Federal Reserve, forcing many emerging market central banks to tighten monetary policy.

Even as rates rise, EM currencies have suffered sharp losses against a strengthening dollar. The Russian ruble, Mexican peso and South African rand each fell 4% or more last month, while the Turkish lira suffered its second-largest monthly loss on record, falling nearly 29%.

Flows to emerging markets outside China suffered a “sudden stop” this quarter according to a Thursday note from the IIF.